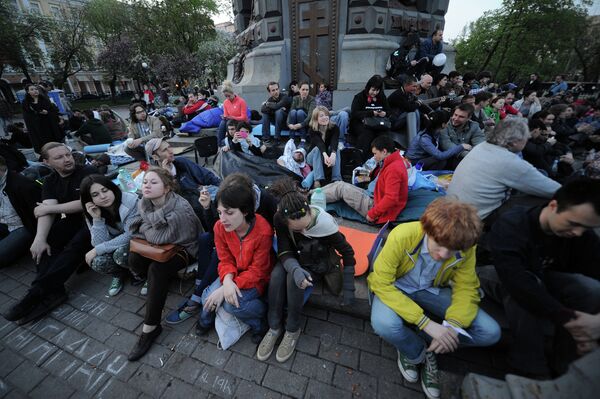 © RIA Novosti . Vladimir Astapkovich
/
Go to the mediabank
Subscribe
International
India
Africa
Police have dispersed about 100 people who spent the night in a downtown Moscow street in a silent protest against Vladimir Putin’s return to the presidency, police said.

Police have dispersed about 100 people who spent the night in a downtown Moscow street in a silent protest against Vladimir Putin’s return to the presidency, police said.

The protesters had gathered near a monument to heroes of the 1877-78 Russian-Turkish war near the Kitai-Gorod metro station following appeals from opposition figurehead Alexei Navalny who was arrested early on Tuesday morning.

A police cordon pressed against the protesters, pushing them into the underpass toward the entrance to the metro station. Several people were arrested while the others escaped.

On Tuesday night police said they arrested five most active protesters near Kitai-Gorod after several warnings. On Tuesday morning, police refrained from any action, just watching the protesters who did not wear any protest symbols and sat peacefully near the monument.

They had spent all night resting in sleeping bags or sitting on pieces of cardboard. In the morning, some of them began playing ball and badminton.

Meanwhile, opposition figureheads Alexei Navalny and Sergei Udaltsov who were arrested early on Tuesday have been released after spending more than six hours at a police station. Their lawyer Nikolai Polozov said they had been detained for "violating the law on organizing a meeting or a demonstration."

The series of anti-Putin protests resumed in Moscow as ex-premier Vladimir Putin was sworn in as president for a third term on Monday. Russian parliament is to vote on the candidacy of Dmitry Medvedev as premier later in the afternoon.

Police arrested about 400 protesters in Sunday’s rallies and 300 people on Monday.