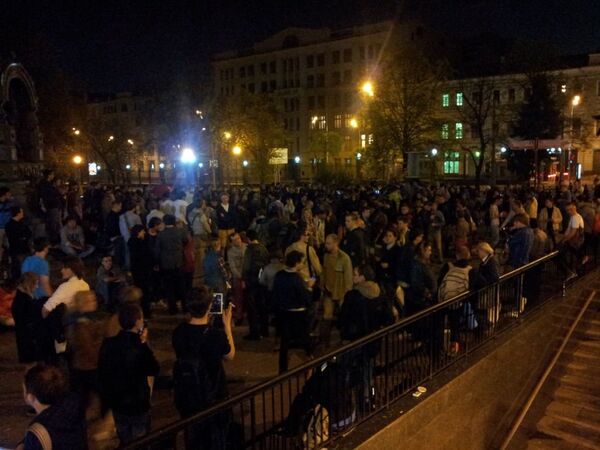 Opposition figurehead and blogger Alexei Navalny has urged his supporters to spend the night near the Kitai-Gorod subway station in downtown Moscow.

“Let’s come to Kitai-Gorod. A continuous, round-the-clock promenade is announced here,” he wrote in his Twitter microblog.

Navalny called on those who are arriving to bring warm clothes and blankets with them.

Another opposition figure, Sergei Udaltsov, is also at the site. Both were on Monday fined 1,000 rubles ($33.5) for defying police orders during the May 6 March of Millions.

There are 200 people at the site, a RIA Novosti correspondent said, and three buses with police officers.

A few dozen people were detained in the area on Monday.

Russian police said they detained 300 people in downtown Moscow on Monday as demonstrators gathered to protest the return of Vladimir Putin to the Kremlin for a third term.

Putin was sworn in as Russian president on Monday in a glittering Kremlin ceremony.

Over 400 people were arrested and scores injured as Sunday’s rally against Putin’s rule turned violent when protesters briefly broke through police lines in a bid to take their protest to the Kremlin walls. Putin’s opponents accuse him of corruption and curtailing political freedoms.