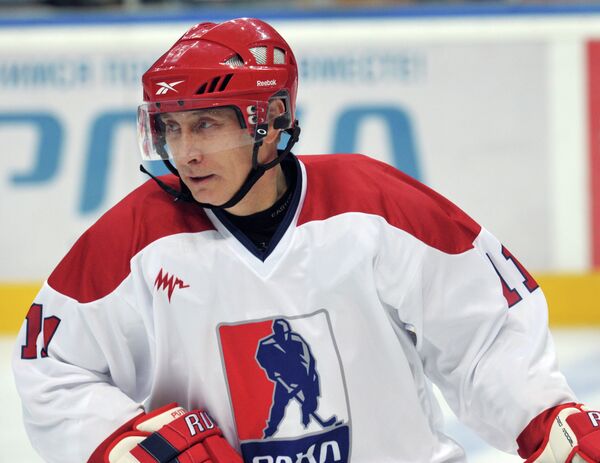 Newly installed Russian President Vladimir Putin opted against the lavish inauguration balls seen in the United States, instead playing in a nationally televised ice hockey exhibition match after he was sworn in Monday.

Putin scored one goal and set up another while playing for a Russian Amateur Hockey League select against a legends’ team boasting Vyacheslav Fetisov, a two-time Olympic gold medalist and NHL Hall of Famer who is also a senator for the ruling United Russia party.

In a speech after the match, Putin praised sport as a unifying force in Russian society.

“I’ve watched with great pleasure how people from the older generation come to sports facilities, how they stay in sport, how they engage with sport,” he said.

Opposition players often appeared reluctant to challenge the newly-installed president, who played in the No. 11 jersey and signed his teammates’ kit after the game.

Putin scored one goal to level the scores at 3-3 and later provided the assist for jazz musician and United Russia member Igor Butman to score.

The match ended 4-4 and Putin opted to take the first shot in the resulting shootout, which he scored, before his team won when Fetisov shot high of the goal.

However, Putin’s performance was not flawless, as he fell when in control of the puck and unchallenged at one stage. The crowd at Moscow’s Megasport arena included former Italian Prime Minister Silvio Berlusconi, known as a friend of Putin.

Putin, 59. returned to the presidency after winning presidential elections in March with 63 percent of the vote, amid accusations of irregularities with the voting process.

He was earlier president between 2000 and 2008, but was forced to step down in 2008 for constitutional reasons, and served as prime minister between 2008 and 2012. His latest presidential term runs until 2018.