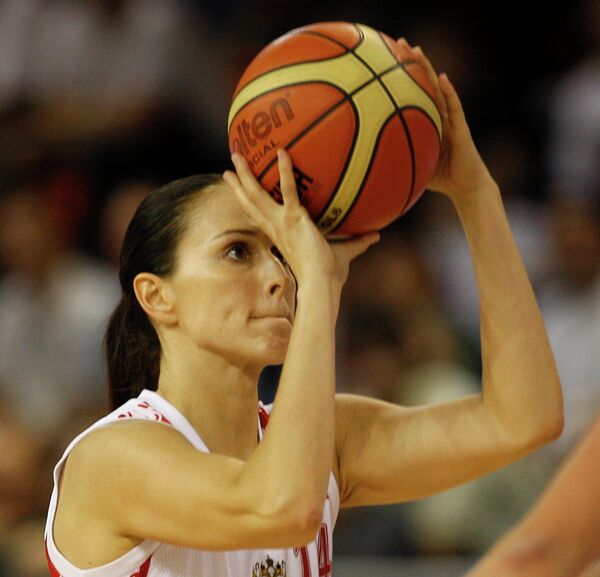 © RIA Novosti . Maxim Bogodvid
/
Go to the photo bank
Subscribe
Russian WNBA championship winner Svetlana Abrosimova has had a “tough” two days since finding out she was not been included in Russia’s plans for the Olympics in London, she said Monday.

Russian WNBA championship winner Svetlana Abrosimova has had a “tough” two days since finding out she was not been included in Russia’s plans for the Olympics in London, she said Monday.

The small forward, 31, captained Russia to the European title last year, and helped the team to the Olympic bronze medal in 2008, but did not make the Russian preliminary Olympic squad because of a lack of recent game time at Russian team UMMC, coach Boris Sokolovsky said Saturday.

“Last couple of days were tough for me because of sudden changes in Russian Olympic roster,” Abrosimova said on her Twitter page.

“No one and no decisions will break me either as a player or as a person. Life goes on,” she said earlier Monday.

The Russian Basketball Federation had not informed her of its decision, she said Sunday.

“Yesterday I found out by chance that it turns out they cut me from the 22 candidates for the Olympic squad. No one even called. Very Russian!” she said.

Abrosimova won the WNBA championship with the Seattle Storm in 2010 and is a seven-time Russian champion, as well as winning the bronze medal at the 2008 Olympics with Russia and competing at the 2000 Olympics in Sydney.

One player who has made the cut is South Dakota-born point guard Becky Hammon, a six-time WNBA All-Star.

Hammon provoked fury in the United States when she became a Russian citizen in 2008 to compete in the Olympic team for Russia after failing to make the cut for the Americans.