Putin Returns to Kremlin Amid Protests 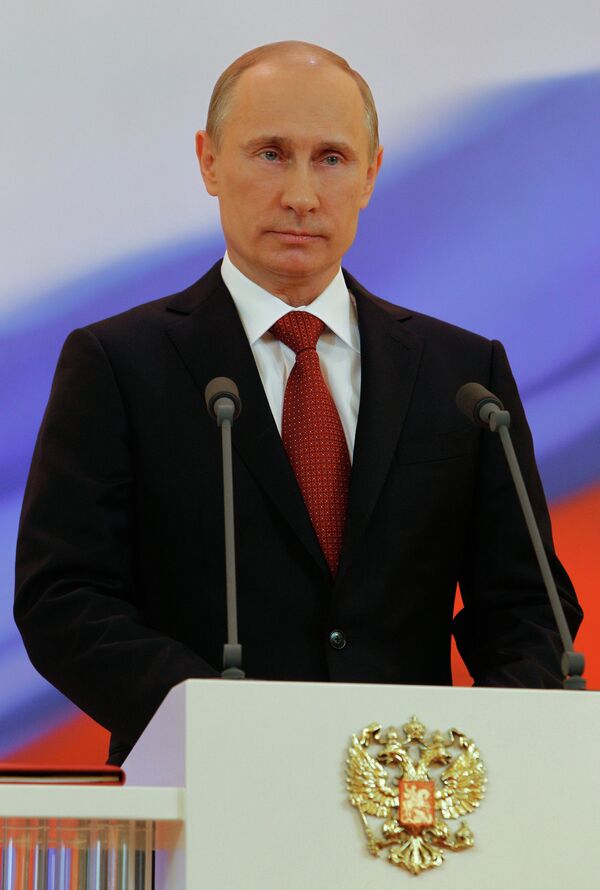 Vladimir Putin was sworn in as Russian president on Monday in a glittering Kremlin ceremony that took place less than 24 hours after protesters opposed to his rule had battled police in downtown Moscow.

Vladimir Putin was sworn in as Russian president on Monday in a glittering Kremlin ceremony that took place less than 24 hours after protesters opposed to his rule had battled police in downtown Moscow.

“I swear on the power invested in me as president of the Russian Federation to respect and protect the rights and freedom of its citizens,” Putin said, his right hand placed on a red-bound copy of the Russian Constitution.

Russia’s nuclear suitcase was handed over to Putin immediately after his inauguration.

Putin’s motorcade had sped through empty streets locked down by a heavy security presence on its way to the Kremlin State Palace, where some 2,000 guests had gathered to witness his inauguration for a six-year term.

“We are entering a new stage of national development,” Putin, 59, said. “We want to live in a democratic country…in a successful Russia.”

"I consider it to be my life’s meaning and duty to serve my fatherland and our people," he added.

Police made 120 arrests as some 200 people, including Yeltsin-era deputy prime minister Boris Nemtsov, protested Putin’s return to the presidency at separate locations near the Kremlin.

Putin was forced to step down in 2008 by a Constitution that forbids more than two subsequent terms, but is silent on further presidential stints. He shifted to the post of prime minister after installing Medvedev in the Kremlin, but remained by far Russia’s most powerful politician.

Medvedev said shortly before Putin’s inauguration that the authorities had become “more open to dialogue” during his four-year rule. Russia’s Constitution was amended in 2008 to increase the presidential term of office from four years to six.

The amendment means that Putin could remain in power until 2024, longer than any Russian or Soviet leader since dictator Joseph Stalin. An April opinion poll by the independent Moscow-based Levada Center indicated that around a third of Russians fully expect Putin to be in charge for the next twelve years.

Over 400 people were arrested and scores injured as Sunday’s rally against Putin’s rule turned violent when protesters briefly broke through police lines in a bid to take their protest to the Kremlin walls. Putin’s opponents accuse him of corruption and curtailing political freedoms. Protest figureheads Sergei Udaltsov and Alexei Navalny were among those detained.

Sunday’s rally followed a series of unprecedented mass anti-government protests this winter. Putin accused the United States of backing opposition leaders and dismissed demonstrators on national television as “Bandar-log,” a reference to the chattering monkeys of Rudyard Kipling’s Jungle Book.

Putin made massive pledges on spending, including raising pensions and salaries for government employees, during his election campaign and he will need to find around $170 billion over the next six years to keep those promises.

“So one should expect a significant degree of continuity in Russia’s approach to foreign policy issues, including relations with the United States,” he added in comments ahead of Putin’s inauguration.