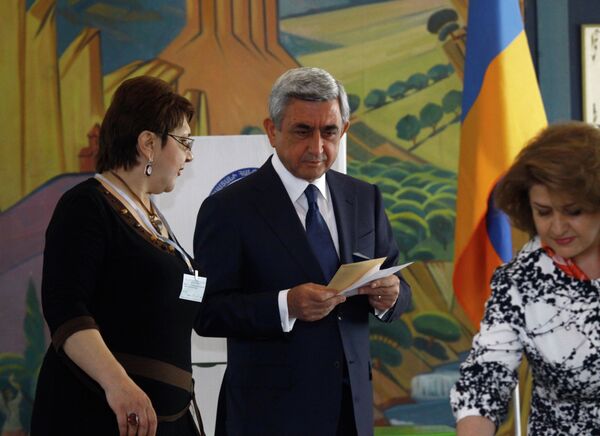 Five political parties and an opposition bloc have passed the election threshold to make in into Armenia’s parliament, according to preliminary vote results published by the Central Election Commission on Monday.

Five political parties and an opposition bloc have passed the election threshold to make in into Armenia’s parliament, according to preliminary vote results published by the Central Election Commission on Monday.

With more than 90 percent of the ballots counted, President Serzh Sargsyan’s Republican Party gained 44.23 percent of the vote in Sunday's elections, followed by the Prosperous Armenia party, its partner in the governing coalition, with 30.31 percent.

The three parties that managed to pass the 5-percent threshold to qualify for seats in the 131-strong parliament are the Heritage party, the Armenian Revolutionary Federation, and the centrist Orinats Erkir (Rule of Law) party, which gained 5.73 percent, 5.66 percent, and 5.43 percent, respectively.

The other three parties participating in the elections – the Communists, the Democrats and the United Armenians party, gained less than 1 percent of the vote each.

Preliminary results from all polling stations are expected within 24 hours after the vote, while the final figures are due in a week.

More than 1.5 million, or some 62.3 percent of almost 2.5 million eligible voters cast their ballot in Sunday's polls, the Central Election Commission said.

More than 31,000 domestic and 647 international observers monitored the polls.

Monitors from the International expert Center of Electoral Systems (ICES) said they had registered no major violations during the vote.

“The elections have proved well-organized so far with no gross violations noted,” Alexander Tsinker, the mission head, was quote by the Panarmenian website as saying. “However, we felt like in some constituencies the voters were being 'helped'. Still, on the whole, the elections follow a normal course.”

The ICES monitoring mission consists of 20 experts from EU member countries, the United States and Israel.

The Armenian police said it received 62 reports about possible election violations; all of them are being probed and three criminal cases have already been launched. Police are also investigating 43 reports on the internet and in the media about suspected violations.