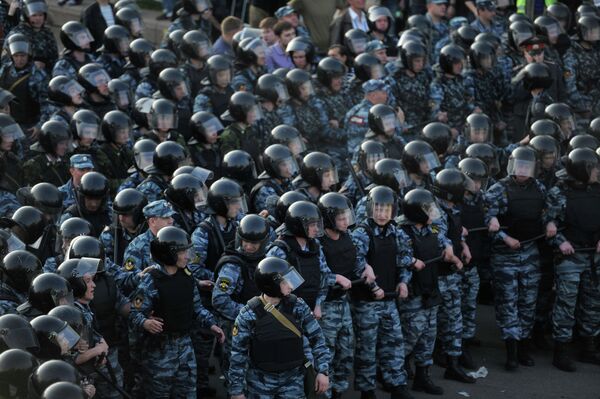 “Fascists!” "Russia without Putin!" shouted protesters as they advanced once more on police lines, holding metal crowd barriers to shield themselves.

The violence came on the eve of Vladimir Putin's inauguration as president. Putin secured a third term in the Kremlin at disputed elections in March.

Police denied reports that they had released what appeared to be tear gas as they fought protesters.

A RIA Novosti correspondent reported seeing a male protester out cold on the street after clashing with officers. A journalist from the Moscow-based Moskovskye Novosti newspaper sustained a head injury after being clubbed by an officer. Unconfirmed images were posted on the Internet of a number of protesters with what appeared to be serious injuries.

Police said over twenty officers were injured by protesters armed with bottles and stones and that three had been hospitalized. A spokeperson said charges of assaulting officers would be brought against a number of people, who could face up to ten years behind bars if found guilty.

An unidentified photographer died after falling from a building while taking pictures.

"Police were too mild," Putin spokesman Dmitry Peskov said on the Dozhd online TV channel. "I would have wanted them to be tougher."

Violence flared after protest leader Sergei Udaltsov led a mass sit-in and demanded to be allowed to march directly to the Kremlin and for President-elect Vladimir Putin’s victory at the disputed March 4 presidential polls to be annulled.

Udaltsov, leader of the Left Front movement, was among those detained. Well-known blogger and anti-corruption activist Alexei Navalny and Yeltsin-era deputy prime minister Boris Nemtsov were also arrested. A magistrate later ordered Nemtsov to pay a fine of 1,000 rubles (about $33) for violating rules for public events, while cases of Navalny and Udaltsov will be heard on Monday.

Late on Sunday Udaltsov was taken to hospital with peptic ulcer.

"Don't leave!" Navalny urged protesters in a Twitter post after being detained. "Stay for as long as it takes!"

A RIA Novosti correspondent at the scene reported arbitrary arrests and said one protester had been detained by eight officers for the apparent crime of wearing a Guy Fawkes mask, the symbol of the global Occupy! movement.

Police also said a number of journalists from the state-run NTV channel had been beaten by protesters. NTV aired a controversial documentary earlier this year that alleged protesters had been paid "cookies and money" to attend last winter's "For Fair Elections" rallies.

Arrests continued into the evening, with police detaining a number of activists who attempted to go on with the protests after being pushed outside the Bolotnaya Square. Several journalists, including with prominent news website Lenta.ru, were also reported arrested.

Opposition figures and RIA Novosti correspondents at the scene estimated a crowd of around 50,000. Udaltsov said in a Twitter post that there were “no less than 100,000” at the rally. A police spokesman said there were 8,000 people present and that Udaltsov had “been out in the sun too long.” A Just Russia parliamentarian Ilya Ponomarev also estimated a crowd of 100,000.

“This was not Udaltsov’s rally,” political analyst Dmitry Oreshkin told the Dozhd online TV channel. “This was a rally of angry citizens.”

Udaltsov and other protest leaders called for a fresh rally on Monday to mark Putin's inauguration.

Putin won a landslide victory at March 4 elections marred by allegations of vote fraud. He was forced to stand down by the Cosntitution in 2008 and shifted to the post of prime minister, but remained by far Russia’s most powerful politician. His opponents accuse him of corruption and a crackdown on political freedoms.

Udaltsov said police in several Russia regions had detained activists attempting to travel to the demonstration.

Protesters, as at previous marches, represented a wide range of political views and organizations, from communists to anarchists, from liberal reformers to nationalists.

The websites of a number of independent media outlets reported coming under apparent hacker attack ahead of the march.

Putin supporters gathered across town at a separate rally on Sunday. Organizers said some 50,000 people were in attendance. Opposition figures accused the authorities of coercing government employees to attend previous pro-Putin rallies in recent months. Putin admitted earlier this year that the accusations could be true, but said the effect on crowd numbers should "not be exaggerated."