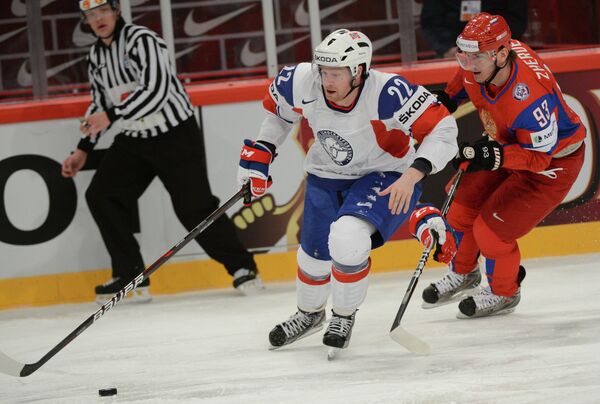 As in Russia’s 5-1 win over Latvia on Saturday, Russia took time to settle, and the Norwegians managed to threaten Colorado Avalanche goaltender Semyon Varlamov’s goal repeatedly despite finishing 46-21 down on shots.

The game started slowly, but burst into life after a minute of the second period when Detroit Red Wings center Pavel Datsyuk struck from Dmitry Kalinin’s assist to open the scoring in Russia’s favor.

The Norwegians thought they had equalized seconds later when Per-Age Skroder jostled with Russia’s Alexei Yemelin and goaltender Varlamov before slotting the puck between Varlamov’s legs, but the referee refused to award the goal.

Russia’s advantage was restored on 33 minutes when Pittsburgh Penguins center Evgeni Malkin played a pass to Nikolai Kulyomin as he fell from a hard challenge, allowing Kulyomin to cut in from the right and bury the puck past Volden.

Norway refused to give in and pulled one back with a powerful long-range slap shot from Marius Holtet four minutes from the end of the second period to make the score 3-2.

With 40 seconds gone in the third period, Alexander Perezhogin and Malkin combined to play through the Norwegian defense for Perezhogin to score Russia’s fourth and restore the team’s two-goal lead.

In the first game of the day in Russia’s Stockholm-based group, Italy beat Denmark 4-3 to pick up a valuable win in the team’s fight to avoid relegation. Germany will take on Latvia in the group’s final game of the day later Sunday.

In the Helsinki group, France beat Kazakhstan 6-3 in the first game, inflicting the Kazakh’s second heavy defeat in two games, before co-host and reigning champion Finland bested Slovakia 1-0. Switzerland takes on Belarus later Sunday in the last game of the day in that group.