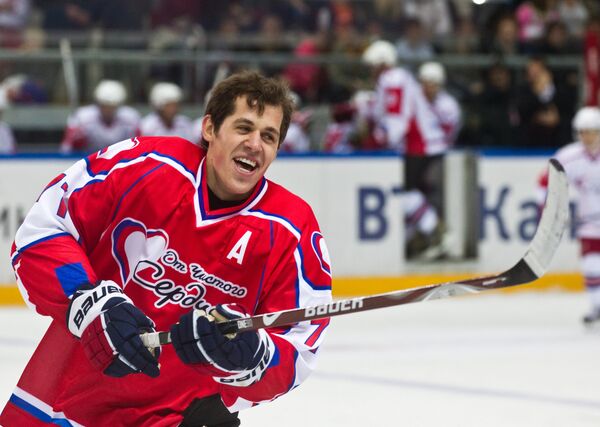 © RIA Novosti . Mikhail Fomichev
/
Go to the photo bank
Subscribe
Evgeni Malkin scored twice to give Russia a 5-2 comeback win against Latvia in their opening game of the world championships Saturday.

Evgeni Malkin scored twice to give Russia a 5-2 comeback win against Latvia in their opening game of the world championships Saturday.

The dominant scoreline disguised a close game in the first two periods, weeks after Russia had lost 1-0 to Latvia in Riga in a warm-up tournament.

Mikelis Redlihs then came close to giving Latvia a 2-0 lead, but saw his shot deflect off the frame of Varlamov’s goal in the last minutes of the first period.

With Indrasis off the ice for tripping, Russia took advantage of a second-period power play as defenseman Ilya Nikulin picked up an Alexander Perezhogin pass before launching a strike from the blue line that flashed into the top corner of Edgars Masalskis’ net.

Russia took the lead three minutes later as Nikulin and Malkin combined to draw Masalskis out of position before Malkin struck from a narrow angle.

Martins Cipulis grabbed a consolation goal for Latvia with a slap shot into the top corner of Colorado Avalanche goaltender Varlamov’s goal.

Evgeny Kuznetsov completed the rout with a solo goal, bursting through the Latvian defense and beating Masalskis with a precise finish.

Russia’s two highest-ranked rivals in the group, Sweden and the Czech Republic, both won on the first day of games Friday, co-host Sweden beating Norway 3-1, while the Czechs defeated Denmark 2-0.

Russia next faces Norway on Sunday, before group stage games against Germany, Denmark, Sweden, the Czech Republic and Italy. The top four of the eight teams in the group go through to the quarterfinals.