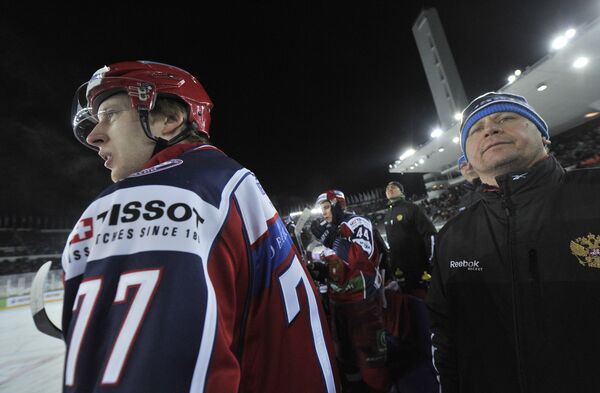 © RIA Novosti . Alexey Kudenko
/
Go to the photo bank
Subscribe
The KHL on Saturday dismissed claims that a positive doping test that ruled Avangard Omsk defenseman Anton Belov out of the last three games of the Gagarin Cup series may have been falsified.

The KHL on Saturday dismissed claims that a positive doping test that ruled Avangard Omsk defenseman Anton Belov out of the last three games of the Gagarin Cup series may have been falsified.

Belov tested positive for an illegal stimulant when his team was 3-1 up against Dynamo Moscow in the KHL's final series last month, needing just one more victory for the title.

But he was suspended and Dynamo stole the series in the last three games.

More than 600 Avangard Omsk fans claimed in an open letter to the KHL on Saturday that Dynamo had approached Avangard to throw one of the games, and set Belov up as punishment when the team refused.

“The doping scandal about Anton Belov, in our opinion, could have been a consequence of the reluctance of the Avangard management to give Dynamo victory in one of the games,” the fans said.

“The consequence of this could easily have been the organized falsification of the results of a doping test.”

The fans demanded the KHL investigate the claims, and threatened to take the case to Russian prosecutors if the league does not look into the case.

“If no attention is paid to our application, we will be forced to go to the International Ice Hockey Federation and the general prosecutor’s office of the Russian Federation.”

KHL sporting director Dmitry Kurbatov told RIA Novosti that the league would not investigate the claims and called the Avangard fans sore losers.

"You have to lose honestly. It's a storm in a teacup with no foundation and no way forward. I don't think we should react to it in any way," he said.

"Who are these fans anyway? We don't know them. Are they grown-ups or kids? How much do they understand about hockey?"

Neither Dynamo nor the Russian anti-doping agency RUSADA could be reached immediately for comment.

Belov’s suspension also keeps him out of action for the world championships in Finland and Sweden, which started Friday.

Russia had been counting on Belov for the championships, but the door is open for the defenseman to return next season, national team coach Zinetula Bilyaletdinov told RIA Novosti on Tuesday.

"Belov for me is a real loss," he said. "I was counting on him. It was 99 percent certain that he would have been in the team. What happened was a real loss."