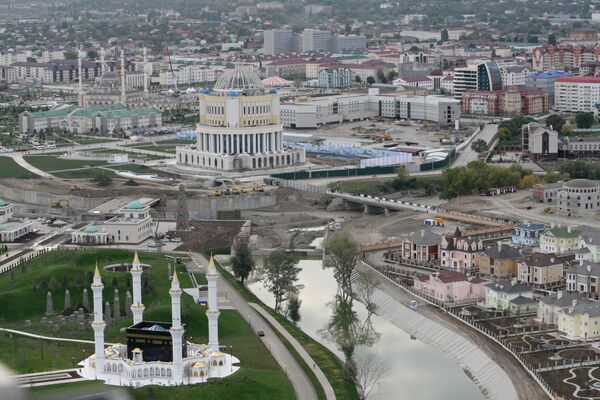 In his role as president of the European Professional Football League, Richards led a delegation of officials to meet Chechnya's Kremlin-installed leader Ramzan Kadyrov, whose government has been repeatedly accused of serious human rights violations.

'We will recommend that Grozny host matches of the 2018 World Cup in Russia," Richards said at a joint news conference with Kadyrov in the provincial capital, in comments carried government-run Grozny-Inform website.

"Your republic is worthy to host games at the highest level," Richards told Kadyrov.

“We have seen that the Chechen Republic is a peaceful and dynamically flourishing region. Here we have seen flourishing towns and villages, modern sports facilities, high-quality roads and, most importantly, cheerful and friendly people,” Richards said.

A problem might be that Grozny is not a list of 13 cities that Russia has submitted to world governing body FIFA.

FIFA is currently touring the cities, grouped into four clusters, and will decide on a final 11 in September. Moscow, St. Petersburg and Sochi are thought to be guaranteed World Cup venues.

Kadyrov first announced his desire to bring the World Cup to Grozny in November of last year, when he inaugurated a new stadium named in honor of his father Akhmad, who was assassinated in 2004.

Kadyrov said he was pleased that the EPFL would hold a board meeting in Grozny.

“For us it is a great honor to receive a meeting of the board of directors of your association, which has happened in the great football centers of the world in past years,” he said.

Russian forces have fought two wars against Chechen separatists since the collapse of the Soviet Union.

While large swathes of Chechnya are now relatively peaceful, an insurgency continues to mount attacks on government forces across the North Caucasus.