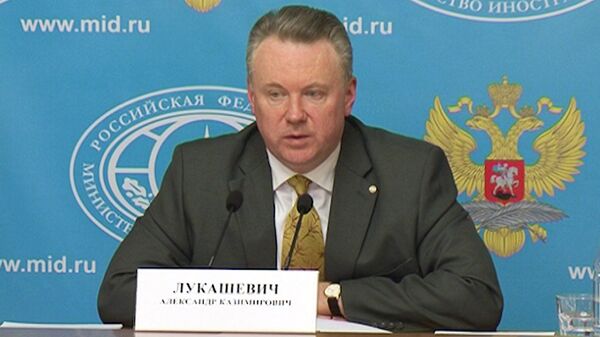 “The Russian Foreign Ministry’s attention was drawn to statements by U.S. Ambassador to Moscow Michael McFaul that U.S. entry bans for some of our country’s officials in the contest of the Magnitsky case were in line with the [U.S.] administration’s policy in the human rights sphere,” Lukashevich said.

“We consider such presentation of a problem unacceptable as it runs against not only the character of Russian-U.S. relations, but also the universally accepted principle of presumption of innocence,” he added.

Moscow has “repeatedly warned that such attempts to interfere in our domestic affairs will not be left without response,” he said.

Magnitsky, an anti-corruption lawyer who worked with the Hermitage Capital investment fund, died in Moscow’s infamous Matrosskaya Tishina pretrial detention center in November 2009, a year after he was arrested on tax evasion charges. Shortly before his arrest, he claimed to have uncovered a massive fraud in which Moscow tax and police officials had allegedly embezzled $230 million of budget funds.

A probe into his death revealed that the 37-year-old lawyer, who was suffering from untreated pancreatitis and hearth condition, did not receive proper medical treatment. Rights activists pointed to multiple violations of the lawyer’s rights during his arrest and detention, including signs that he was beaten by prison guards hours before his death.

The U.S. Senate is expected to consider a bill later this month imposing sanctions on Russian officials allegedly linked to Magnitsky’s death as well as on “individuals responsible for other gross violations of human rights.” Despite the outrage that the Magnitsky Act triggered from Russia, U.S. Department of State spokeswoman Victoria Nuland said in April the U.S. administration continued to support the legislation.

Commenting on the bill in March, McFaul said: "We believe that we can ban people from coming to this country that do grossly abusive things regarding human rights,” according to Foreign Policy's The Cable blog. He added, however, that the proposed legislation was “redundant” because visa sanctions had already been imposed on some Russian officials believed to be involved in Magnitsky's death.

The Department of State issued visa bans for several dozen Russian officials in connection to the Magnitsky case in July 2011. In response, Russia has also imposed travel bans on several U.S. officials over what Lukashevich described on Thursday as “grave and resonant violations of human rights,” particularly those of inmates of the infamous Guantanamo and Abu Ghraib prisons.