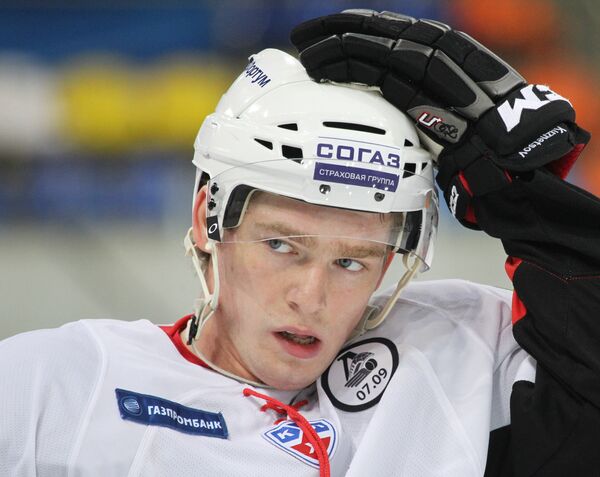 Pittsburgh Penguins center Evgeni Malkin told RIA Novosti on Tuesday that he didn't click on the ice with Russian prodigy Evgeny Kuznetsov during their first practice session for Russia ahead of the world championships.

Pittsburgh Penguins center Evgeni Malkin told RIA Novosti on Tuesday that he didn't click on the ice with Russian prodigy Evgeny Kuznetsov during their first practice session for Russia ahead of the world championships.

Malkin is representing his country at the tournament in Sweden and Finland that starts Friday, and admitted to an awkward first training session with his 20-year-old countryman.

"We had some misunderstandings," Malkin said. "We collided several times. Also I just arrived and was a bit tired so did not always keep up with such a quick forward as Kuznetsov."

Kuznetsov has been billed as Russia's next great hockey export to the NHL, but earlier Tuesday announced he had turned down a move to the Washington Capitals to remain at his KHL team, Traktor Chelyabinsk, for another two years.

Malkin recognized the players simply needed time to adjust to each other.

"Misunderstanding is inevitable at the first training, whether you play with Evgeny Kuznetsov or Sydney Crosby. It won't take us long to find the common ground."

Malkin is free to play after Pittsburgh crashed out in the first round of the NHL playoffs with a 4-2 series loss to the Philadelphia Flyers on April 22.

He said he enjoys playing with Kuznetsov and believes he has a "great future."

"I think Kuznetsov will grow into a world star," Malkin said.

Drawn against Sweden, the Czech Republic, Germany, Norway, Latvia, Denmark and Italy, the Russian national team will play all its group stage matches in Stockholm.

The team suffered a 2-1 defeat to the Czech Republic in their final warm-up match on Monday, with coach Zinetula Bilyaletdinov blaming the result on a lack of concentration.

This season, Kuznetsov averaged close to a point a game, with 19 goals and 21 assists in 49 matches to help his team to the Continental Cup as regular season champions.