Avalanche and NHL No Match for Russia - Varlamov 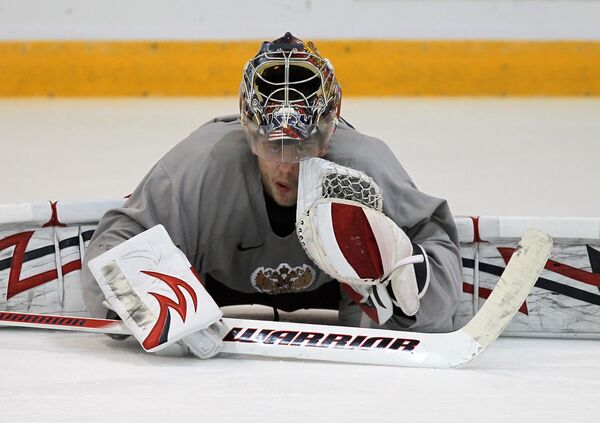 Playing for the Colorado Avalanche in the NHL cannot compare to games for the Russian national team, goaltender Semyon Varlamov told RIA Novosti on Monday.

Varlamov is a leading contender for Russia’s starting goaltender spot when the world championships start next week, and he is available after the Avalanche failed to reach the NHL playoffs.

“A game for the national team is obviously different to a game for a club. Here there’s more emotion, you’re playing for Russia though, you fight,” he said while with the team in the Czech Republic.

“I try to perform to my best in every match, to fight to the end and do everything to win.”

This did not mean he is relaxed when playing in the NHL, he said.

“Absolutely every match is important to me, regardless of whether I’m playing for a club or the national team.”

In the Czech Hockey Games warm-tournament, Russia lost 2-0 to Finland on Thursday and 2-1 to the Czech Republic on Sunday, but beat Sweden 4-2 on Saturday, but these setbacks had not damaged the Russians’ confidence, Varlamov said.

“Naturally there’s optimism ahead of the world championships. I think that we’re getting better with every game and it’s noticeable,” he said.

Varlamov will vie with Atlant Moscow Region’s Konstantin Barulin for the starting goaltender spot and said Barulin was not at fault for the two goals he conceded against the Czech Republic.

“Kostya played well. We conceded two goals but he wasn’t to blame for those goals. He had practically no chance.”

Varlamov first played in the NHL with the Washington Capitals in 2008, who selected him as a first-round draft pick in 2006, before moving to the Avalanche in 2011. In 112 NHL games, he has a save percentage of .915.