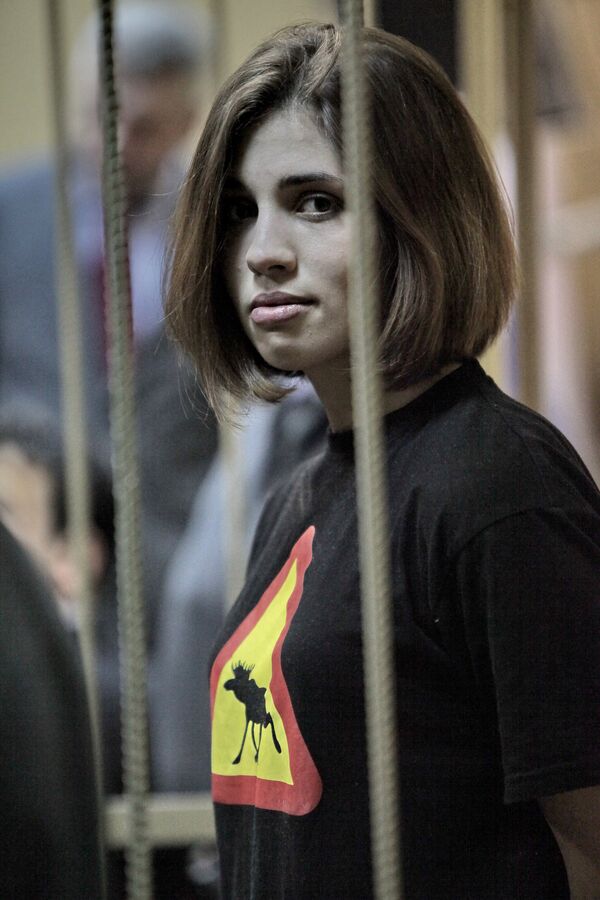 © RIA Novosti . Andrey Stenin
/
Go to the photo bank
Subscribe
A police inquiry has ruled that an anti-Putin protest by the all-female punk group Pussy Riot inside Moscow's main cathedral did not constitute a criminal action, a lawyer has said.

A police inquiry has ruled that an anti-Putin protest by the all-female punk group Pussy Riot inside Moscow's main cathedral did not constitute a criminal action, a lawyer has said.

"The inquiry failed to find in the actions of persons at the Christ the Savior Cathedral motives of hatred and hostility," Violetta Volkova, a lawyer for suspect Yekaterina Samutsevich, wrote on her Twitter account late on Wednesday.

Samutsevich and two other suspects are currently in custody over the performance and face up to seven years on hooliganism charges. A date for their trial has yet to be set.

Last week, a Moscow court extended their detention until June 24. Prosecutors had said they feared for the "safety" of the suspects. The group's lawyer, Nikolai Polozov, said last month death threats had been made against them and their children.

But he described the band's trial last week as "a mockery of a case" and said he would appeal the ruling.

"The participants... got what they hoped for," outgoing President Dmitry Medvedev said in a live televised interview on Thursday.

Pussy Riot said the performance was a response to Orthodox Church head Patriarch Kirill's backing of President-elect Vladimir Putin in the run-up to his landslide March 4 election victory. The patriarch called the 12 years of Putin's rule a "miracle of God" in a televised meeting.

Lawyer Volkova told the Moskovsky Komsomolets newspaper the inquiry, which was concluded on April 2 but made available to lawyers this Tuesday, only found the group could have offended the "feelings of the believers."

Polozov said the inquiry was just one of a series of inquiries and could not result in the immediate release of the suspects.

"But this is, of course, a very serious argument in our favor," he told RIA Novosti.

An opinion poll released last week by the VTsIOM state pollster indicated that a mere 10 percent of Russians want to see the suspects remain behind bars. Just over half of the respondents favored community work or a fine.

Samutsevich, Nadezhda Tolokonnikova and Maria Alyokhina were detained in early and mid-March. All the three women admit being part of the Pussy Riot collective, but deny taking part in the cathedral performance. Both Alyokhina and Tolokonnikova have small children.

Amnesty International recognized the suspects of prisoners of conscience earlier this month, and a number of public and Orthodox Church figures have called for their release. But a Church spokesman slammed Amnesty's decision, calling it an "insult to those genuine prisoners of conscience who have suffered under totalitarian regimes such as China, Iran, the Soviet Union and Hitler's Germany."

Last week, thousands of people attended a mass prayer outside the Christ the Savior Cathedral against what Patriarch Kirill described as an attack from "enemy forces."