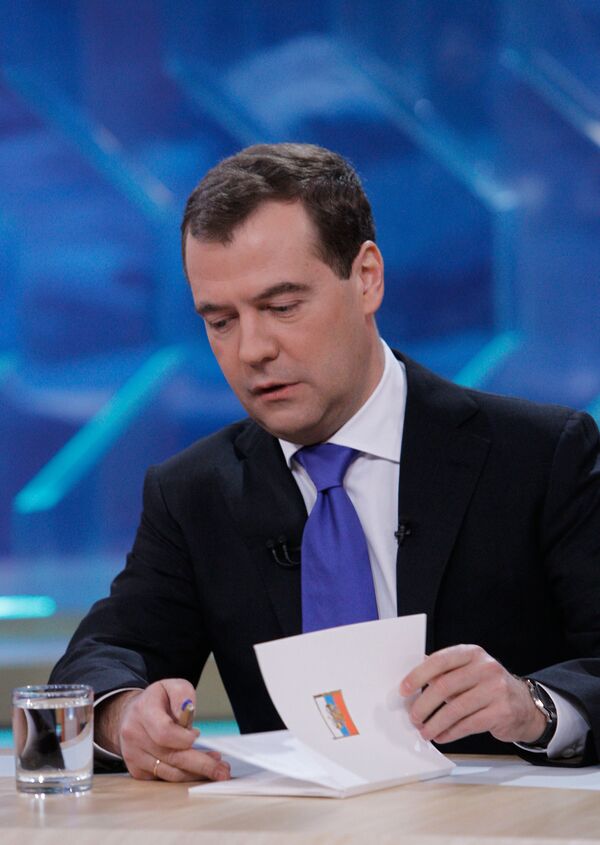 Outgoing Russian President Dmitry Medvedev admitted once again on Thursday that his much-vaunted campaign against corruption had yielded only “modest” results.

Outgoing Russian President Dmitry Medvedev admitted once again on Thursday that his much-vaunted campaign against corruption had yielded only “modest” results.

“It would be a massive exaggeration to say that nothing is being done,” Medvedev said during a live interview on state-run television. “But if we are talking of results, then they are, of course, modest.”

“Let’s be frank. Officials are a corporation. They don’t want anyone to interfere in their business,” he went on, adding that stricter controls needed to be imposed at government institutions.

Medvedev also suggested Russia’s centuries-old problem of corruption was a matter of “habit and mentality.”

“This is a battle that needs to be fought on a mental level,” he said.

Medvedev, who stands down on May 7 after four years in office, made the fight against the graft that sees Russia consistently hover around 150th place in Berlin-based NGO Transparency International’s corruption index a cornerstone of his presidency.

But he admitted in early 2011 that his campaign had seen “almost no success,” confessing that the skeptics who had predicted he would fail were “absolutely right.”

Government officials have been forced to submit annual income declarations under Medvedev, but anti-corruption watchdogs and opposition media have frequently questioned the validity of the figures supplied.

Medvedev also said that he had dismissed half of the governors of Russia’s regions over suspicions of corruption since he came to power in 2008.

‘I was forced to fire 50 percent of governors,” he said, noting that when there had been a lack of conclusive proof of their guilt, he had told them “Resign, or it will be worse.”