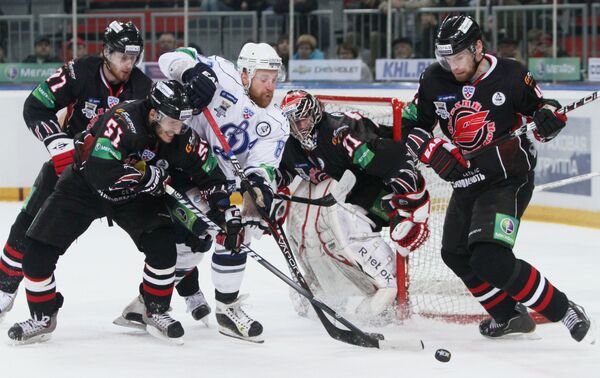 Avangard Omsk wasted a series of chances to win the Gagarin Cup in allowing Dynamo Moscow to win the seven-game series from 3-1 down, Avangard defenseman Martin Skoula told RIA Novosti on Wednesday.

Dynamo won Wednesday’s decider 1-0 in Omsk to take the series 4-3 as both sides fought to lift the cup for the first time.

“It was only our own fault. We had all the chances and all the circumstances were on our side but we didn’t close it. We basically lost the series ourselves.”

Dynamo did not play excellent hockey and won as a result of Avangard’s errors, Skoula said.

“We had three chances to close it and we didn’t do that. It wasn’t like they were playing so good, it was just we shot ourselves in the leg.”

Avangard defenseman Anton Belov was suspended after the fourth game after testing positive for a banned stimulant, but his absence was not to blame for Avangard’s poor run of form, Skoula said.

Dynamo is the first Western Conference team to lift the Gagarin Cup after it was won by Ak Bars Kazan in the first two seasons and Salavat Yulaev Ufa in 2011.