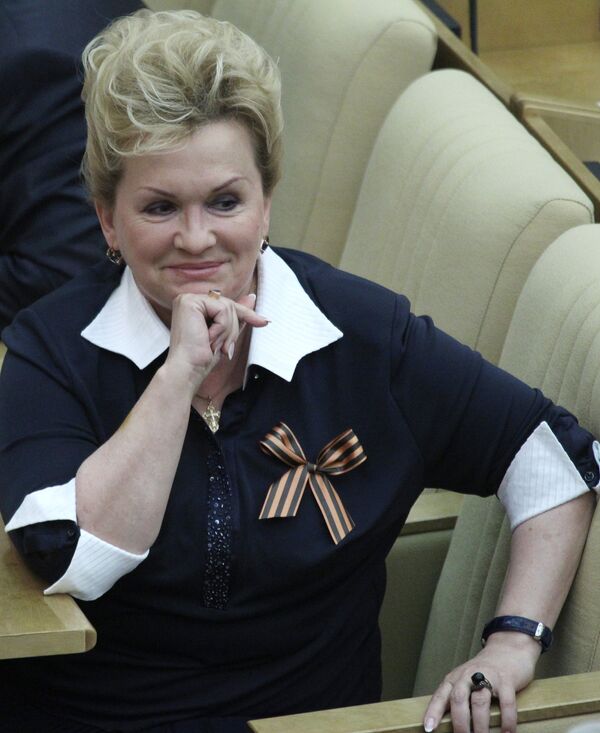 © RIA Novosti . Vladimir Fedorenko
/
Go to the photo bank
Subscribe
Lyubov Sliska, once one of the highest-ranking women in United Russia’s hierarchy, said on Wednesday that she quit Russia’s ruling party because it had no use for her.

Lyubov Sliska, once one of the highest-ranking women in United Russia’s hierarchy, said on Wednesday that she quit Russia’s ruling party because it had no use for her.

The 58-year-old Sliska said United Russia failed to employ her in recent years due to suppression of all discussion inside the party, which is gradually losing public support.

“United Russia and I don’t need each other anymore,” Sliska said. She added she has no plans to join any other party at the moment.

Sliska, who was held deputy speaker jobs in the State Duma between 1999 and 2011, said she filed her resignation letter in March, but did not announce it before. She said last June she would not seek reelection, a decision media blamed on her conflict with the party’s then-curator in the government, Vyacheslav Volodin.

Sliska’s former party comrade Sergei Zheleznyak expressed regret at her dropping out, but said the party is as vibrant as ever, with hot discussions raging in the Duma and thousands joining it every month.

United Russia barely managed to retain a majority at the December parliamentary polls. Its victory was blamed on vote rigging by many critics, who rallied in the tens of thousands in Moscow after the vote.

President-elect Vladimir Putin, who heads United Russia without being a member, announced on Tuesday that he is handing over the reins to his outgoing predecessor Dmitry Medvedev. Analysts said the move likely spelled the beginning of the end for the flagging party of power.