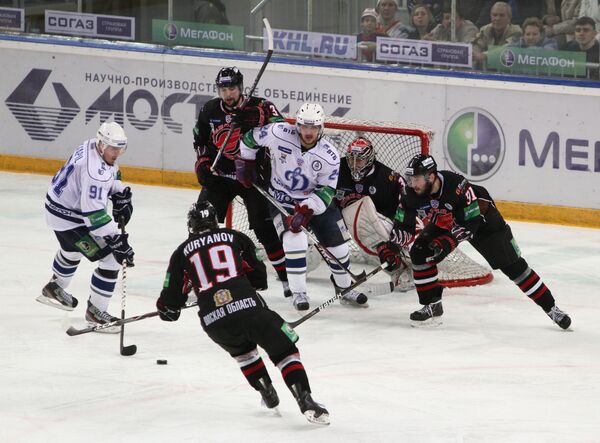 © RIA Novosti . Alexey Malgavko
/
Go to the photo bank
Subscribe
Dynamo Moscow has won the Gagarin Cup for the first time after Jakub Klepis’ close-range strike gave the team a 1-0 victory away to Avangard Omsk in the deciding match.

Dynamo Moscow has won the Gagarin Cup for the first time after Jakub Klepis’ close-range strike gave the team a 1-0 victory away to Avangard Omsk in the deciding match.

Klepis flicked the puck over diving Avangard goaltender Karri Ramo to give Dynamo a 4-3 series victory that makes it the first Western Conference team to win the title.

Dynamo goaltender Alexander Yeryomenko made 18 saves to shut out Avangard in a tight game, as Dynamo posted 19 shots of their own.

The result ends a season that began in tragic circumstances when the entire Lokomotiv Yaroslavl roster died in a plane crash and ended in controversy when Avangard defenseman Anton Belov was suspended after testing positive for a banned substance after game four of the final series.

In the three games Avangard was without Belov, Dynamo came back from 3-1 down to win the series in the second Gagarin Cup decider for Dynamo coach Oleg Znarok, who lost out with MVD in 2010.

After a careful start for both teams, Dynamo came close to opening the scoring when Leonid Komarov and Denis Mosalyov failed to convert good chances from rebounds as the visitors dominated, going 11-7 on shots in the first period.

Avangard fought back in the second, posting nine shots to four for Dynamo, with chances for Dmitry Syomin and Vladimir Pervushin, while the hosts also enjoyed their first and only power play of the game.

Alexander Perezhogin scored for the Siberian in each of the first four games of the series, but he too proved unable to score against Yeryomenko.

For Dynamo, Marek Kvapil forced an acrobatic one-handed save from Ramo after 32 minutes, while Kvapil missed the target while one-on-one with the Finnish goaltender on 38 minutes after Dynamo broke free of a period of sustained Avangard pressure.

The third period opened promisingly for Dynamo, which soon enjoyed a five-on-three power play but proved unable to convert its chances. With eight minutes remaining, Kvapil brought the puck round behind the goal and played in Klepis, who propelled the puck over the prone Ramo and into the net.

Avangard then laid siege to Yeryomenko’s goal as the Moscow team held on to secure a first Gagarin cup for the Russian capital and deny the honor to Siberia.