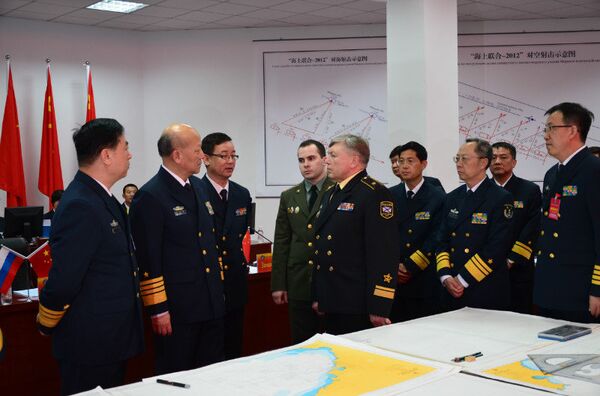 Russia and China have completed the first stage of naval exercises in the Yellow Sea, off the coast of Qingdao in eastern China, the Russian Navy said.

Russia and China have completed the first stage of naval exercises in the Yellow Sea, off the coast of Qingdao in eastern China, the Russian Navy said.

Though Russia and China conduct joint naval drills on a regular basis since 2005, the Maritime Cooperation-2012 will be the first Chinese-Russian military exercise outside the framework of the Shanghai Cooperation Organization.

“The first stage of the exercise - the deployment of ships - has been completed,” the ministry said.

The exercise, to last until Friday, involves more than 20 vessels from Russia and China, including destroyers, escort vessels, hospital ships, submarines and supply ships.

“A task force of Russian ships, comprising the Varyag missile cruiser, the Admiral Vinogradov, the Marshal Shaposhnikov and the Admiral Tributs large anti-submarine destroyers and the SB-522, MB-37 and Pechenga supply ships, left the port of Qingdao and anchored in the area of the Maritime Cooperation-2012 exercises in the Yellow Sea,” the Russian Navy said in a statement.

On Wednesday the participants will begin the active phase of the exercise, comprising several simulated missions, such as the rescue of a hijacked ship, commercial vessel escort, and defending a convoy from air and sea attacks.

Russian Defense Minister Anatoly Serdyukov said on Tuesday the exercise is not directed against “third states” and is not an attempt by Moscow and Beijing to create a military alliance.