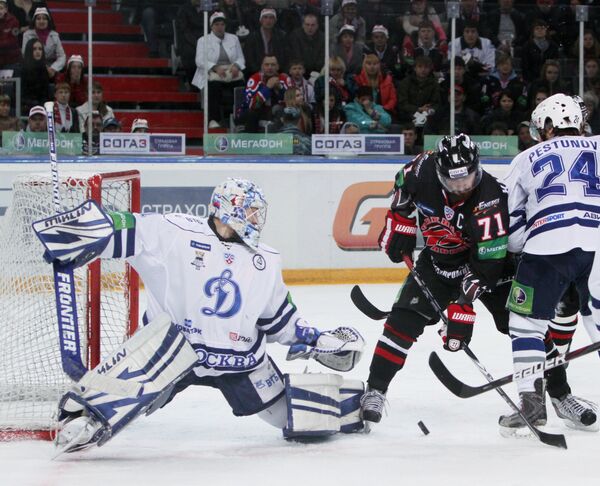 The Gagarin Cup will have a new holder Wednesday night, with its destination to be decided by a final clash in Siberia between two teams fighting to lift the trophy for the first time.

The Gagarin Cup will have a new holder Wednesday night, with its destination to be decided by a final clash in Siberia between two teams fighting to lift the trophy for the first time.

Dynamo Moscow would be the first Western Conference team to take the KHL’s highest honor, while Avangard Omsk will become the first Siberian winner if it is victorious on home ice.

Avangard has already missed two chances to seal the series after racing to a 3-1 lead after the first four games of the best-of-seven final, and lost 5-2 in Moscow on Monday.

Dynamo’s ex-Washington Capitals forward Jakub Klepis told RIA Novosti that Dynamo was confident of a narrow victory in the decider.

“Everyone’s in a very good mood, but we can’t relax. The last step is always the most difficult but I hope we’ll do it and take the Gagarin Cup to Moscow,” he said Tuesday.

“The match will be very interesting, and the difference in the score will be one goal.”

“We can’t think that the Cup is ours, that we’ve won two in a row and the third will be easy. It won’t be that simple. We have to get together and play all 60 minutes strongly.”

The match in Omsk will be the second time that Dynamo coach Oleg Znarok has been involved in a Gagarin Cup decider after losing to Ak Bars Kazan two years ago while coach of MVD, which later merged with Dynamo.

Znarok is better prepared this time, he said after Monday’s game.

The series saw controversy when Avangard defenseman Anton Belov was suspended because he tested positive for a banned stimulant after the fourth game. Without Belov in the lineup, the next two games saw a comeback for Dynamo, starting with a 3-2 win in Omsk on Saturday.

Regardless of the result, the season will bring to a close a KHL season that began in tragic circumstances with the death of the entire Lokomotiv Yaroslavl roster as the team flew to its first game in Minsk, Belarus, in September.

A new Lokomotiv team will return to the league next season, and Wednesday’s decider is expected to be the last outing for the memorial patches that every player has worn this season.