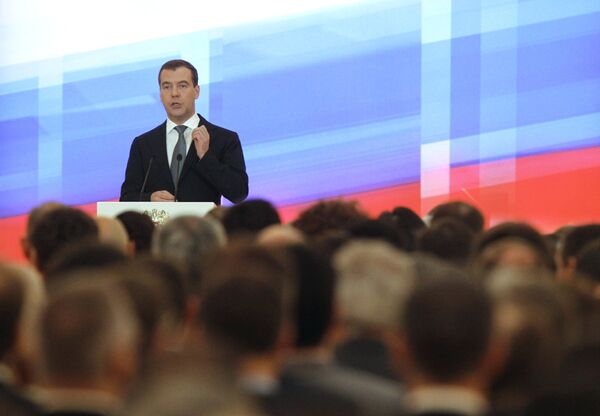 Outgoing President Dmitry Medvedev trumpeted on Tuesday what he said was the liberalization of Russian society during his four years in office, but also admitted “signs of stagnation” in the political system.

Outgoing President Dmitry Medvedev trumpeted on Tuesday what he said was the liberalization of Russian society during his four years in office, but also admitted “signs of stagnation” in the political system.

“Direct governor elections, the free registration of political parties and the new order of parliamentary elections bear witness to the higher level of political culture in society,” Medvedev told an extended session of the State Council, making reference to proposed but not yet implemented reforms.

Medvedev, 46, is widely expected to take up the post of prime minister after Putin’s inauguration as president for a third term on May 7. Putin won a landslide victory in March 4 presidential polls that were marred by allegations of electoral violations.

Medvedev also told the audience - in an address carried live by state-run television - that society had become “more open and more successful” since he took office in 2008 and hailed the recent revival of interest in politics among Russians.

But analysts were quick to attack Medvedev’s claims.

“Under Medvedev there has been a huge gap between rhetoric on democracy and reality,” said analyst Lilia Shevtsova of the Moscow-based Carnegie Center. “Medvedev inflicted a crucial blow on the institution of democracy in Russia and bears massive responsibility for its discreditation."

Last December’s disputed parliamentary polls, which the opposition alleged were fixed in favor of Putin’s United Russia party, triggered an awakening of political passions not seen in Russia since the early 1990s and led to mass anti-Putin protests in Moscow and St. Petersburg.

The unprecedented show of dissent saw Medvedev propose in December a bill of reforms, which included the return of direct elections for governors, scrapped by Putin in 2004 as part of a wider clampdown on political freedoms to combat what he called then an “epidemic of collapse” threatening Russia.

But Medvedev sought on Tuesday to preempt any possible speculation that his speech was an attack on Putin’s policies, saying the 2004 clampdown was “absolutely justified.”

“The unstable political system we inherited from the anarchy of the 1990s was in need of cleaning up,” Medvedev said, noting however that the system had since “stabilized.”

“Democracy is no longer a swearword,” he added.

But with stabilization, Medvedev said, had come signs of “stagnation.”

“And, naturally, the question arises, what to do next?” he asked. “Leave everything as it is and in this way make a stake on so-called direct management…or return to more effective development, including on the basis of the direct involvement of citizens in politics?”

“I am certain that political diversity and the direct participation of citizens in the political process at this stage of our history will lead not to a return of chaos, but will make government stronger and more effective,” Medvedev said.

"From the very start of his presidency, Medvedev said that freedom was better than non-freedom," said Alexei Mukhin, head of the Center for Political Technologies think-tank. “Now he is saying the same, in an apparent desire to show that his liberal attitudes have not changed.”

Medvedev announced last September that he would not seek a second term of office in favor of Putin, who was forced to stand down in 2008 by a Constitution that forbid more than two consecutive stints in the Kremlin, but was silent on subsequent terms.

Medvedev also pledged to continue his agenda of modernization when he shifted into the role of prime minister and repeated earlier vows to tackle corruption.