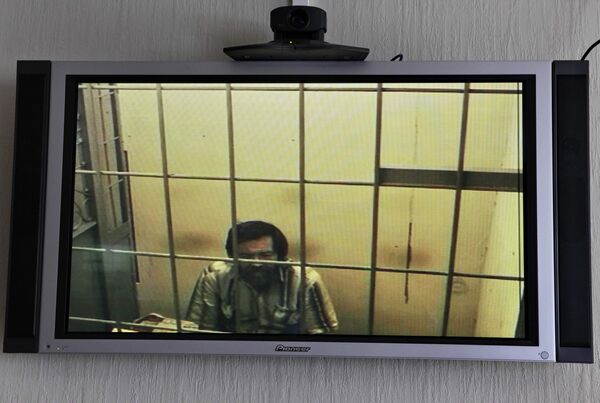 © RIA Novosti . Andrey Stenin
/
Go to the mediabank
Subscribe
International
India
Africa
Russian President Dmitry Medvedev has pardoned a man who has spent almost two years in jail for attacking a police officer during a 2009 unsanctioned demonstration in Moscow, according to a decree published on the government’s online legal portal.

Russian President Dmitry Medvedev has pardoned a man who has spent almost two years in jail for attacking a police officer during a 2009 unsanctioned demonstration in Moscow, according to a decree published on the government’s online legal portal.

Medvedev ordered the release of Sergei Mokhnatkin from prison “proceeding from the principles of humanity,” the decree says.

Mokhnatkin has been sentenced to 2.5 years in prison for attacking the police officer during a rally in support of the freedom of assembly on Moscow’s Triumfalnaya Square on December 31, 2009.

Mokhnatkin said he did not take part in the rally, but was attempting to verbally defend an elderly female protester who was being roughly detained by the police. Sergeant Dmitry Moiseyev testified that Mokhnatkin had headbutted him and broken his nose.

Mokhnatkin and defense witnesses said that it was Mokhnatkin who was beaten by policemen at the rally, but their testimony was ignored by the court. The prosecutor demanded a five-year jail sentence for the man. His appeal was rejected.

Mokhnatkin’s arrest and jailing sparked a wave of protests in Russia, with opposition supporters declaring him a political prisoner. The man has repeatedly complained of mistreatment by personnel of the high security prison in the western Tver region where he was held, including beatings, unjustified incarceration, and placement under permanent video surveillance.

Mokhnatkin’s lawyer Dmitry Agranovsky said on Monday the man had filed an appeal to the president to pardon him. In early March, the Kremlin said Medvedev had ordered the Prosecutor General’s Office to probe the legality of the guilty verdicts handed down to 32 people, including Mokhnatkin, as well as former Yukos head Mikhail Khodorkovsky and his business partner Platon Lebedev, who have been sentenced to13 years in jail on embezzlement and money laundering charges.

The initiative came from the presidential council on human rights, whose head Mikhail Fedotov praised Mokhnatkin’s release on Monday. The council believes the decision to jail him was “very controversial in terms of evidence [of Mokhnatkin's guilt] and its fairness,” he said.

He also expressed hope that Medvedev’s “act of mercy and humanity” will be followed by other similar decisions.

“I also hope the State Duma will pass a decree on amnesty concerning those convicted of economic crimes as a result of very controversial verdicts,” he said in an apparent reference to Khodorkovsky and Lebedev.

“I am so happy,” she told RIA Novosti. “We should thank Dmitry Anatolyevich [Medvedev]. Poor [Mokhnatkin] was suffering so badly.”

“I hope Dmitry Anatolyevich will mark the last days of his presidency with kind deeds,” she added.