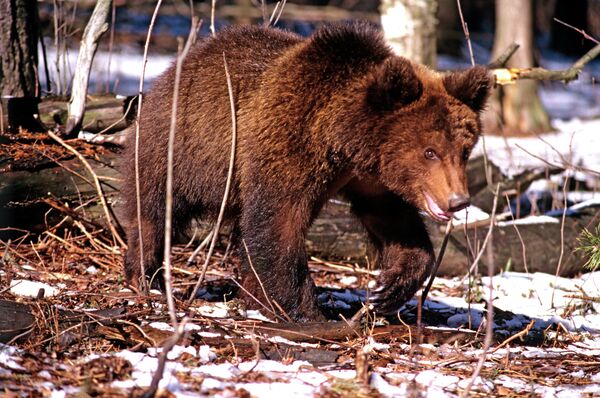 © RIA Novosti . Oleg Lastochkin
/
Go to the photo bank
Subscribe
Latvian police are searching for a bear that ran away from a wildlife sanctuary in Latvia’s northeastern Vidzeme region on Sunday evening, local police said.

Latvian police are searching for a bear that ran away from a wildlife sanctuary in Latvia’s northeastern Vidzeme region on Sunday evening, local police said.

This is not the first time that female brown bear named Made flees her enclosure in the Ligatne Nature Trails. Last August, she dug her way under the fence of her enclosure and disappeared. The animal was found the day after, eating apples in a private garden.

This is the second search for a bear in a Baltic state reported in less than 24 hours.

In a separate development, police are searching for a wild bear seen running loose on the outskirts of the capital Tallinn, the Estonian edition of the Delfi portal reported on Sunday.

The bear cub, thought to be only one or two years old, is being search by armed police and veterinary experts.

Wildlife expert Peep Mannil said the bear possibly strayed from his mother and went to the city “because of lack of experience or hunger.”

"Bears have a longer growing-up period than other animals,” Mannil said, adding that the bear can nevertheless be dangerous to people when approached too close.

As the search effort yielded no results so far, police and experts hope that the bear probably managed to find the way back to his natural habitat on his own.