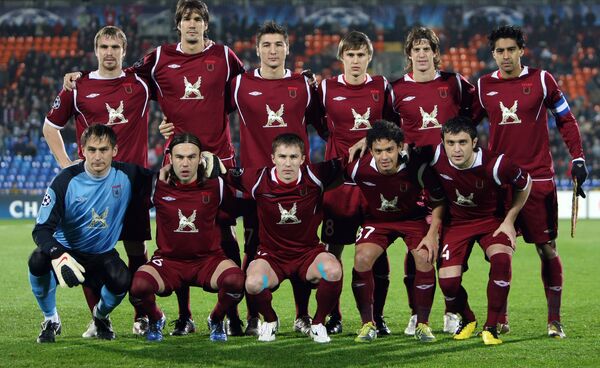 © RIA Novosti . Roman Kruchinin
/
Go to the photo bank
Subscribe
Lokomotiv Moscow and Rubin Kazan played out a goalless draw in the Russian Premier League on Sunday, with Rubin in particular missing several chances to score.

Lokomotiv Moscow and Rubin Kazan played out a goalless draw in the Russian Premier League on Sunday, with Rubin in particular missing several chances to score.

Rubin's Alexander Ryazantsev blazed over from eight yards out on 69 minutes in the clearest chance of the game.

The result keeps Lokomotiv fifth, but brings them within one point of Moscow rivals CSKA in fourth.

Rubin stay seventh, having failed to regain the sixth place that Guus Hiddink’s Anzhi took earlier Sunday with a 3-0 win at Spartak Moscow.

Rubin remain without an away win since November 18, and have won just one game in eight in 2012, while Lokomotiv are now on a run of four games without a win.

On the half hour, Lokomotiv striker Roman Pavlyuchenko was brought down by Rubin goalkeeper Sergei Ryzhikov outside the penalty area as the former Tottenham Hotspur man bore down on goal.

Lokomotiv players appealed for a foul, but the referee waved play on.

Rubin threatened shortly before half time with Lokomotiv goalkeeper Guilherme tipping Sergei Davydov’s header over the bar, before long-range efforts from Alan Kasaev and Roman Eremenko failed to find the target.

Lokomotiv started the second half brightly, with Ryzhikov forced to save a long shot from Magomed Ozdoev, before Ryazantsev missed the chance to score at the other end.

Rubin had a flurry of chances in the last ten minutes, with a long shot from Eremenko, before Guilherme caught Davydov’s looping header and dived to stop Vladimir Dyadyun’s low shot.

Dmitry Sychev sliced wide from a tight angle for Lokomotiv in stoppage time, and Davydov fired at Guilherme from a promising position.

Ryazantsev missed the target with the last shot of the game.

In other results this weekend, Zenit salvaged a 2-2 draw against FC Kuban; Dynamo Moscow edged CSKA Moscow 1-0; Amkar Perm beat bottom side Spartak Nalchik 1-0; FC Volga scored a 2-0 win over FC Tom Tomsk; and FC Krasnodar got a 1-0 away win at Terek Grozny.