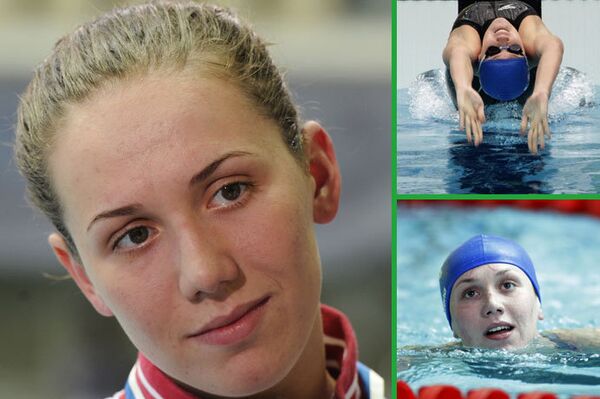 © Сollage by RIA Novosti
Subscribe
Former Olympic 100-meter backstroke record holder Anastasia Zueva has qualified for London 2012 after swimming under the qualification time at the Russian trials in Moscow on Sunday.

Former Olympic 100-meter backstroke record holder Anastasia Zueva has qualified for London 2012 after swimming under the qualification time at the Russian trials in Moscow on Sunday.

Zueva finished in a time of 58.97 seconds, and was the only Russian to qualify, with second-placed Ksenia Moskvina and third-placed Maria Gromova each more than two seconds slower.

The qualification time is 1 minute 0.82 seconds.

Zueva’s chances of success in London were boosted by the decision to schedule the 100-meter backstroke race before the longer distances, she said.

“It’s good that the hundred will be at the start of the Games, then the 200-meter distance.”

Chaun said did not swim to her full potential at the trials.

“I’m very pleased that I won today, but everything’s just getting started,” she said.

Danila Izotov won the men’s 100-meter freestyle race in a time of 48.27 seconds to qualify for the Olympics, while second-placed Nikita Lobintsev and third-placed Andrei Grechin also beat the Olympic cut-off time of 48.82 seconds.

Lobintsev, a former world and European champion, had earlier failed to make the cut for the 200 and 400-meter freestyle events.

There was disappointment for Alexander Tikhonov, the Russian record holder for the men’s 200-meter medley, who failed to qualify for the Olympics despite winning the Russian title. His time was 0.53 seconds outside the Olympic cut-off of 2 minutes 0.17 seconds.

Russia suffered a blow Saturday when none of its female swimmers met the qualification standard for the 100 and 200-meter freestyle and 100 meter butterfly, leaving Russia without an entry in those events at the Olympics.