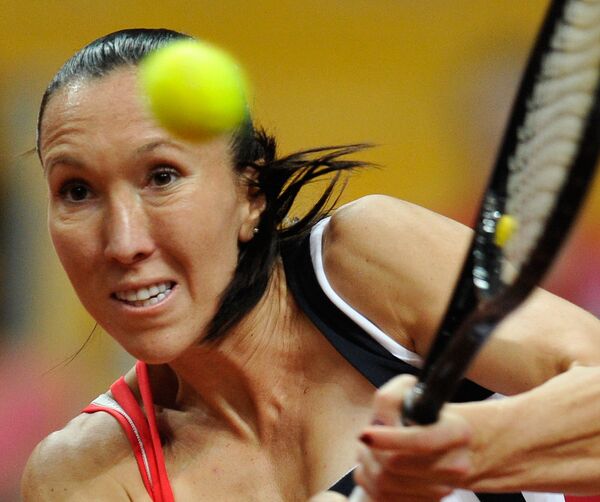 © RIA Novosti . Alexey Kudenko
/
Go to the photo bank
Subscribe
Serbia will face the Czech Republic in its first Fed Cup final after defeating Russia 3-1 in Moscow on Sunday.

Serbia will face the Czech Republic in its first Fed Cup final after defeating Russia 3-1 in Moscow on Sunday.

Jelena Jankovic beat Svetlana Kuznetsova 6-1, 6-4 to build an unassailable lead in the tie after fending off a second-set comeback from the Russian.

Reigning champion the Czech Republic booked its place in the final by beating Italy in the weekend’s other semifinal.

Jankovic took charge early in the first set as Kuznetsova racked up 22 unforced errors in seven games. The Russian mounted a comeback in the second set, breaking Jankovic’s serve for a 2-0 lead, but the Serb responded with two breaks of her own to take the set.

The final doubles match between the Russian pair of Maria Kirilenko and Elena Vesnina against Serbia’s Aleksandra Krunic and Bojana Jovanovski is a dead rubber.

In Sunday’s first match, Ana Ivanovic came back from a set down against Anastasia Pavlyuchenkova to win 3-6, 6-0, 6-3 and give Serbia the edge.

On Saturday, Serbia took an early lead when Jankovic beat Pavlyuchenkova 6-4, 6-3, before Kuznetsova leveled the scores with a 6-2, 2-6, 6-4 win over Ivanovic in a clash between two former French Open champions.

Russia and Serbia’s only previous meeting came in 2008, with the Russians winning 3-2 on that occasion. Ivanovic, Jankovic and Kuznetsova all took part in that tie, while Jovanovski and Pavlyuchenkova were in their countries’ squads but did not play.