Thousands Pray in Moscow in Defense of Russian Orthodox Church 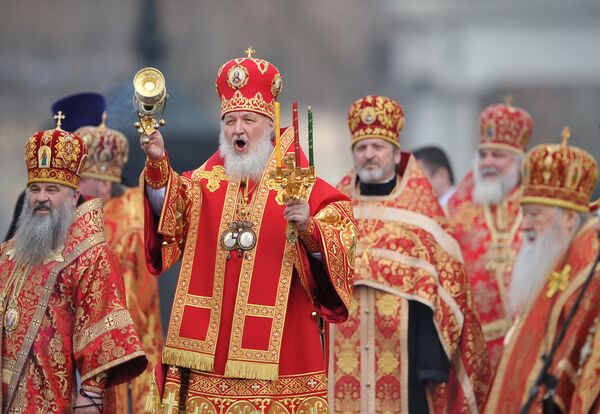 About 65,000 Orthodox Church believers gathered at Moscow’s Christ the Savior Cathedral on Sunday for a nationwide prayer in defense of the faith and desecrated sacred objects, Russia's Interior Ministry said.

About 65,000 Orthodox Church believers gathered at Moscow’s Christ the Savior Cathedral on Sunday for a nationwide prayer in defense of the faith and desecrated sacred objects, Russia's Interior Ministry said.

Earlier, Moscow's Patriarchy put the number of worshippers who joined the event at 50,000.

Orthodox Church head Patriarch Kirill held a liturgy in downtown Moscow’s Christ the Savior Cathedral, during which he urged believers to take part in the nationwide prayer outside the Cathedral “for our faith, our Church, our sacred objects and our Motherland.”

Kirill said he hoped the nationwide prayer would “multiply our spiritual strength” to fight against faithlessness.

Bishops and priests led by Patriarch Kirill prayed together with Orthodox Church believers in front of sacred objects outside of the cathedral, including ones that were recently desecrated by vandals.

“This was a necessary move…We can not and do not want to hold meetings to show our position…we just can get together and pray,” said Anton Alyalichev, participant of the prayer.

Sacred Orthodox objects were specially brought to the Cathedral for one day.
Among the relics there was a 3.5-meter crucifix cut by an attacker in a cathedral in the Southern Russian city of Nevinnomyssk. There are also five of the 30 icons cut with an ax in the town of Veliky Ustyug this March; the Virgin Mary icon, shot with bullets in the early 1920s, was also brought from the same city.

Separate prayers were also held in front of other Russian cathedrals.

Priests and believers also prayed that those who desecrated sacred objects in a series of recent blasphemous actions across Russia change their ways, and for good reputation of the Church.

The Church has been involved in a number of high-profile scandals recently. Top Church officials have been criticized by bloggers and opposition media for their “lavish” lifestyles.

The Church’s Supreme Council said in a statement earlier this month that it had been targeted by “those pushing through radical liberal values” over its opposition to same-sex marriages and consumerism.