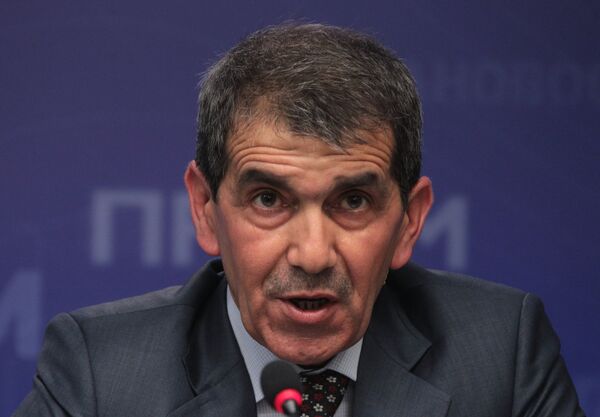 The KDP delegation led by Abdulsalam Abdullah, a senior party official in charge of relations with Asian states, was invited to Moscow by A Just Russia party, one of the country’s four parliamentary parties, whose 64-strong faction is the third largest in the State Duma.

During their stay in the Russian capital, the Iraqi delegation also met with representatives of other parliamentary parties such as the pro-Kremlin United Russia and the Communists, as well as with “Foreign Ministry people,” Abdullah said on the sidelines of a Friday news conference in Moscow, without specifying with whom in the ministry.

“Our party considers our relations with Russia strategic and balanced… we would like to further strengthen them,” he said during the news conference.

The KDP and A Just Russia agreed to sign a memorandum of cooperation, which may happen “in the next few days,” he said.

Besides closer relations with Russian political parties, the KDP would also welcome cooperation “between our parliaments and governments,” Abdullah told RIA Novosti.

The KDP is led by Massoud Barzani, the president of the Kurdistan region, which enjoys broad autonomy from Baghdad. The party is part of a majority coalition in the unicameral Iraqi Kurdistan Parliament, along with the Patriotic Union of Kurdistan (PUK).

Andrei Klimov, a United Russia member and first deputy chairman of the State Duma committee in charge of international affairs, was among the lawmakers who hosted the Iraqi delegation in the Duma.

He said United Russia was interested in closer cooperation with “influential political parties operating at the regional level” which have “a clear ideological basis that is close to ours,” according to a statement published on the United Russia website.

Russia wants to have good relations with the KDP because of the “importance” of the region the party represents, he explained, adding that “besides politics, this includes economy, security, and considerable prospects for cooperation in the humanitarian sphere.”

“Given the development of a new large-scale integration project – the Eurasian Union – we are virtually moving even closer to each other,” he said, referring to an integration initiative promoted by Russian Prime Minister and President-elect Vladimir Putin, which is designed to boost cooperation across the Eurasian space.

“This is without doubt an important factor to develop cooperation,” Klimov added.

There are an estimated 15,000 Kurds in Russia, which Abdullah said was “the second country to open its Consulate General in Erbil,” the capital city of the Kurdistan region, adding “this will forever stay in our memory.”

He called on Russian companies, including those involved in the energy, construction a tourism sectors, to invest in the Kurdistan region, saying that they “could become decent competitors of those companies already operating” there.

The Kurdistan region is one of the most prosperous in Iraq, with its economy dominated by the oil industry, agriculture and tourism.

The Kurdistan Regional Government (KRG) claims the right to negotiate its own contracts with foreign oil companies, offering production-sharing deals that many companies consider more attractive than those offered by Baghdad. The Iraqi government has banned companies that signed deals with the KRG from taking part in an energy licensing auction due in late May.

The Norbest Limited energy company, which the KGR described as an affiliate of the TNK-BP consortium (although the Russian-British company denied any link), is among a few foreign energy companies working in the region, which also include U.S. energy giant Exxon Mobil.

A Russian delegation led by Yevgeny Primakov, Russia’s former prime minister and then-President of the country’s Commerce and Industry Chamber, visited the Kurdistan region in 2008 in a bid to boost cooperation, but there have been no major deals signed since then.