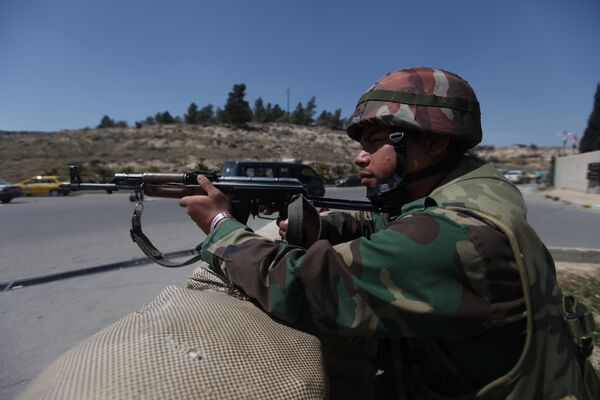 © RIA Novosti . Rustam Buzanov
Subscribe
Syria faces a catastrophic civil war if both sides in the crisis that has gripped the country for over a year fail to take advantage of the current fragile ceasefire there, Russia’s Foreign Ministry said on Friday.

Syria faces a catastrophic civil war if both sides in the crisis that has gripped the country for over a year fail to take advantage of the current fragile ceasefire there, Russia’s Foreign Ministry said on Friday.

“A very important event in the developments in the country has come about,” the ministry said in a statement on its website. “The issue in Syria now is the choice between a transition towards peaceful, nationwide talks or a descent into civil war.”

United Nations envoy Kofi Annan’s six-point peace plan for Syria stipulated the start of a ceasefire on April 12 in a bid to stop the violence the UN says has so far claimed around 9,000 lives.

But UN Secretary General Ban Ki-moon said on Thursday that he had seen “troubling” evidence of ceasefire violations by both government troops and rebel forces. He also said Syria had failed to comply with its obligations under Annan’s peace plan to withdraw troops and heavy weapons from urban areas.

Russia’s Foreign Ministry said on Friday the ceasefire was holding, despite “violations and provocations” but warned of a “new circle of violence” in the event of its breakdown.

Foreign ministers from the Friends of Syria coalition, which Russia is not part of, met in Paris on Thursday evening. They said later in a statement that the ceasefire and Anna’s peace plan were the "last hope" of avoiding civil war in Syria.

French President Nikolas Sarkozy accused Assad before the meeting of seeking to wipe the rebel city of Homs “off the map.”

The Friends of Syria group, which includes the United States and the United Kingdom, suggested earlier this month arming Syrian rebels, a proposal that Russia said would merely prolong the conflict.

Moscow has twice vetoed UN Security Council resolutions over what it called pro-rebel bias since the start of an uprising against the rule of Syrian President Bashar al-Assad in March 2011, but gave its full backing to Annan’s peace plan.

Russian Foreign Minister Sergei Lavrov also criticized earlier this month Assad’s handling of the uprising against his rule and said Syria needed to be “more decisive” to meet its commitments to Annan’s peace plan.

And Ban called on Thursday for an increase in the UN mission to Syria to 300 observers. Thirty observers are currently permitted to monitor the ceasefire under a UN resolution passed on Saturday, but only six are currently on the ground.

His proposal was backed by Lavrov on Friday.

“We should do everything possible to pass a second resolution as soon as possible to authorize a full-scale monitoring mission to Syria,” he said after a meeting with Italian foreign and defense ministers on the Syria crisis.

Russia’s Foreign Ministry also said on Friday a delegation from the Syrian Popular Front for Change and Liberation opposition movement would visit Moscow for talks next week.

Delegates from another internal opposition movement, the National Coordination Body for Democratic Change (NCB), held talks with Lavrov in Moscow on Wednesday, a week after Russia’s top diplomat met with his Syrian Foreign Minister Walid Muallem.

The NCB called the talks “important and successful.” A delegation spokesman also told RIA Novosti the group would consider dropping its opposition to foreign military intervention in Syria, if it was “the only solution” to the conflict.

Syrian and foreign-based rights groups have accused Syrian government troops of summary executions and torture. Damascus says it is fighting “terrorists” and that some 2,000 members of the security forces have been killed in the violence.