Pussy Riot to Remain Behind Bars 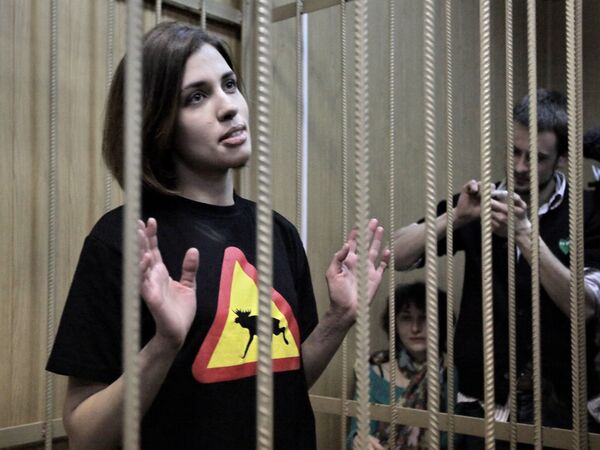 A Moscow court ruled on Thursday that three members of the all-female punk group Pussy Riot must remain in custody until at least June 24 for their part in an anti-Putin protest at Moscow’s largest cathedral.

A Moscow court ruled on Thursday that three members of the all-female punk group Pussy Riot must remain in custody until at least June 24 for their part in an anti-Putin protest at Moscow’s largest cathedral.

“No one is to blame for this situation but [Prime Minister] Vladimir Putin,” suspect Nadezhda Tolokonnikova said as she was led away, reported art group Voina in its Twitter microblog.

“If I cannot hear my child’s voice because of my criticism of the authorities, then welcome to 1937,” said fellow suspect Maria Alyokhina, alluding to the height of Soviet dictator Joseph Stalin-era terror, in a quote carried by the RAPSI news agency.

All three of the accused face up to seven years on hooliganism charges. A date for their trial has yet to be set as investigators continue their probe. Pussy Riot lawyer Nikolai Polozov told the Public Post website on Thursday that the suspects had not been questioned since their initial arrests.

"This is a mockery of a case and it should be closed immediately,” Polozov told RIA Novosti earlier in the day.

Some 300 people had gathered in front of the court to demand freedom for the suspects, who were detained in early and mid-March. Police made a number of arrests, detaining some 30 demonstrators wearing t-shirts in support of the group.

Prosecutors had asked the court to prolong custody to "ensure the safety" of the accused. A lawyer for the group said in March that death threats had been made against the suspects and their children.

The ruling comes ahead of an April 22 “defense of the faith” nationwide prayer called by the Orthodox Church to protect it from attacks by “"anti-Russian forces.”

Five masked members of Pussy Riot performed a protest song entitled “Holy Sh*t” at the altar of the Christ the Savior Cathedral in downtown Moscow on February 21. The lyrics included lines such as “Holy Mother, Blessed Virgin, chase Putin out!”

Pussy Riot said the performance was a response to Orthodox Church head Patriarch Kirill’s backing of President-elect Vladimir Putin in the run-up to his landslide March 4 election victory. The patriarch called the 12 years of Putin's rule a "miracle of God" in a televised meeting.

An opinion poll released on Monday by the VTsIOM state pollster indicated that a mere 10 percent of Russians want to see the suspects remain behind bars. Just over half of the respondents favored community work or a fine.

Yevgenia Chirikova, one of the leaders of this winter’s anti-Putin protests said in her Twitter microblog that the decision not to free the suspects on bail had “set Russia back 500 years.”

“Welcome to the Middle Ages!” she wrote.

Tolokonnikova, Alyokhina and Yekaterina Samutsevich were detained in early and mid-March. All the suspects admit being part of the Pussy Riot collective, but deny taking part in the cathedral performance. Both Alyokhina and Tolokonnikova have small children.

Amnesty International recognized the suspects of prisoners of conscience earlier this month, and a number of public and Orthodox Church figures have called for their release. But a Church spokesman slammed Amnesty’s decision, calling it an “insult to those genuine prisoners of conscience who have suffered under totalitarian regimes such as China, Iran, the Soviet Union and Hitler’s Germany.”

Some 10,000 people attended a rally condemning the group's actions in the south Russian city of Krasnodar early in April.

And Patriach Kirill hit out at those who he said seek to "justify and downplay this sacrilege" in an address to believers in March. "My heart breaks from bitterness that amongst these people there are those who call themselves Orthodox,” he said.