Public Television in Russia May End Up Satisfying No One 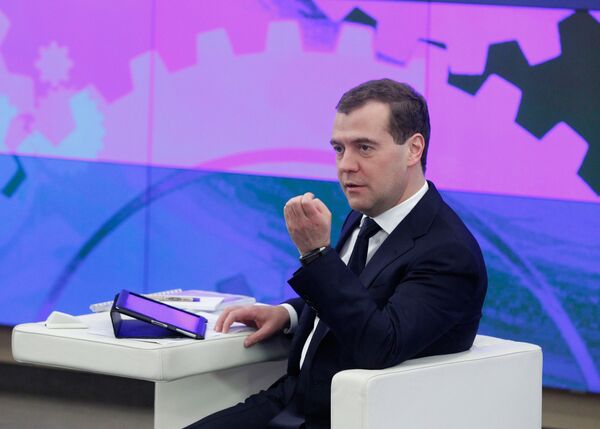 © RIA Novosti . Mikhail Klimentyev
/
Go to the photo bank
Subscribe
President Dmitry Medvedev’s call for a new public television platform last December conjured visions of a Russian BBC for the country’s liberals. Yet worries are now growing that the president’s control over the new television station could prevent it from broadcasting opinions critical of the government.

President Dmitry Medvedev’s call for a new public television platform last December conjured visions of a Russian BBC for the country’s liberals. Yet worries are now growing that the president’s control over the new television station could prevent it from broadcasting opinions critical of the government. Medvedev has maintained that the new station will be the freest television channel in Russia. But like a number of other liberal initiatives that Medvedev has undertaken in the waning days of his presidency, the television station is increasingly being seen as a half-measure meant to mollify the public.

Medvedev signed a decree creating the new public station on Tuesday, saying it would likely be released by next January. Speaking at his “Open Government” initiative, Medvedev said that “measures have been taken to relieve needless government influence on the activities of this public institution.”

Now, controversy is centering on just how independent Russia’s public television will be. The decree signed by Medvedev gives the president the right to appoint the general director and the editor-in-chief of the new station. Moreover, the station’s board of directors, entrusted to provide for public oversight of the station’s content, will also have to pass through a presidential filter.

“The model for public television is going to be defined by the political views of those included in the board,” said media analyst and Russian Journal editor-in-chief Alexander Morozov. “If these are people that insist on representing public opinion, it is possible we might see it develop into something like the BBC. But if the council is filled with people who don’t have that political or professional will, then it’s possible it could simply turn into something like the [Defense Ministry’s] Zvezda channel.”

For liberals, the television station outlined in Medvedev’s decree came as a disappointment. Mikhail Fedotov, the head of the presidential council for people’s rights, told Kommersant today that the opening of a public television station was an important step forward for Russian media, but that the project was limited in scope. “[Medvedev’s] order opens a new age in the development of the press and civil society,” he said. “Yet that doesn’t mean that the idea of our council is reflected in the order. One can’t say that this is the best version. This version is more practical.”

Medvedev has been accused of introducing a number of half-measure political reforms in his final months as Russia’s president. In the same speech when he reopened the topic of public television, Medvedev made bombshell announcements that he would reinstate direct elections of governors and ease restrictions on political parties. Yet those reforms have increasingly come under scrutiny in their finished forms – gubernatorial elections have been dogged by the possible installation of a “presidential filter,” and a boom in political parties is said to only help the ruling party split the opposition vote.

Similarly, others say that public television is a government concession that offers little real meaning. Anna Kachkaeva, a media analyst for Radio Free Liberty and a professor at the prestigious Higher School of Economics, told Gazeta.ru that the television project was designed to deter public influence. “Society has once again been alienated from even the chance to influence the content of television,” said Kachkaeva. “In no way is society represented in [Medvedev’s] decree.”

Calls for public television have been around since NTV was bought out early last decade, but the cause only returned to the limelight after tens of thousands rallied against alleged voter fraud in ruling party United Russia’s favor during the December parliamentary elections. When Vladimir Putin won the presidential elections with a comfy margin and lower indicators of falsifications this March, attention turned to the government’s monopoly on television as an unfair political advantage.

Morozov was pessimistic on the fate of Russian public television, saying it would likely resemble a state news agency rather than a real platform for public opinion. But he added that if successful, public television could play a key role in resurrecting free media where it is needed most: in Russia’s regions. “The most important goal for ideal, public television in this country would be to renew critical reporting in the provinces because that is where free journalism is in the most dire straits,” said Morozov.