Moscow to Get UV-Purified Metro Cars 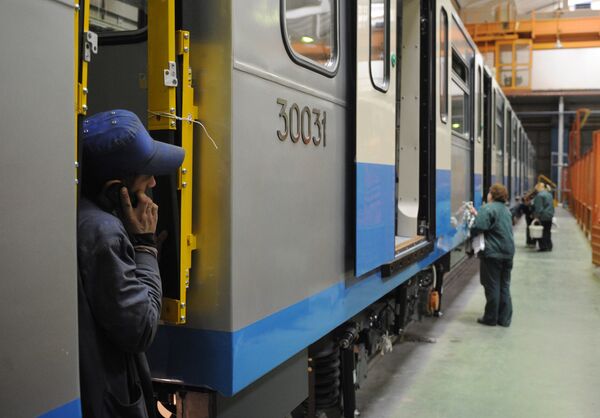 © RIA Novosti . Grigoriy Sysoev
/
Go to the photo bank
Subscribe
Moscow’s rapid transit system, which is growing at a robust pace, is up for a vital upgrade, with 640 new state-of-the-art metro cars due to hit the rails in 2012-2013.

Moscow’s rapid transit system, which is growing at a robust pace, is up for a vital upgrade, with 640 new state-of-the-art metro cars due to hit the rails in 2012-2013.

The trains will ship out from the Metrovagonmash plant in Mytishchi outside Moscow, which clinched a two-year deal worth an estimated 20 billion rubles ($680 million) with the capital’s metro. It dispatched the first batch of cars on Wednesday.

Moscow's rapid transit system was born in the heyday of Stalinist glory in 1935. As of last year, it was the world's third most heavily used, behind only Tokyo and Seoul, serving some 6.5 million passengers a day, with 185 stations and more than 300 kilometers of lines. Fifteen new stations were opened since 2005 and 14 more planned until 2015.

Its rolling stock, however, was an obsolete embarrassment in recent years, the staple a car developed in the mid-1970s and offering a clunky and unbearably noisy monument to Soviet design.

But things can be expected to change, because Metrovagonmash is launching mass production of its new, still-nameless trains known only as 81-760/761, a serious upgrade of 2002’s Rusich model.

The plant itself is a veteran of Russian industrialism, established in 1897, but has been keeping up with the times, even weathering the downturn of the early ‘90s with relatively little setbacks, thanks to a steady demand for its metro cars from all over the Soviet Union and Eastern Europe.

“See that building over there? It’s pre-revolution, though the equipment inside is brand new,” Gritsayev said during a tour of the plant, pointing out a pink brick building that looks like a Dickensian decoration hijacked by Hello Kitty fans.

The new metro cars for the capital can cram in 320 passengers to speed them around at 90 kph, and come with extra features including improved air conditioning and UV air purification systems.

The features were introduced on complaints from passengers who spoke about stuffiness and their fear of riding crowded trains during flu epidemics, Gritsayev said.

The first train made for the Moscow metro under the two-year deal was to ship out Wednesday, said Metrovagonmash official Grigory Ilyukhin.

The shipment from Mytishchi is done by regular locomotive, treating lucky passengers of commuter trains to the surreal sight of a metro train traversing regular railways outside Moscow.

Metrovagonmash is set to manufacture about 320 more cars in 2012 and the same amount the next year under its first two-year contract with the Moscow metro. The plant can produce 30 cars a month on average, Ilyukhin said.

The Metrovagonmash, which is part of Transmashholding, is also pushing to introduce nationwide its rail buses – short diesel trains between one and three cars long, capable of carrying up to 200 passengers, that are utilized for remote and low-traffic lines.

The rail buses are rapidly gaining in popularity in European countries, including Germany, Italy, Switzerland and Poland, due to their low operating costs. Metrovagonmash is currently producing 22 two-car rail buses for Serbian railways, and the factory's diesel-powered trains are also utilized throughout Russia, including in Rostov and Chelyabinsk regions.

But the Moscow government is against introducing rail buses in the capital due to their diesel engines, though they are compliant with Euro-4 emission standards and no more harmful than the city's wheeled buses, Gritsayev said during the tour of the rail bus production line on Wednesday.