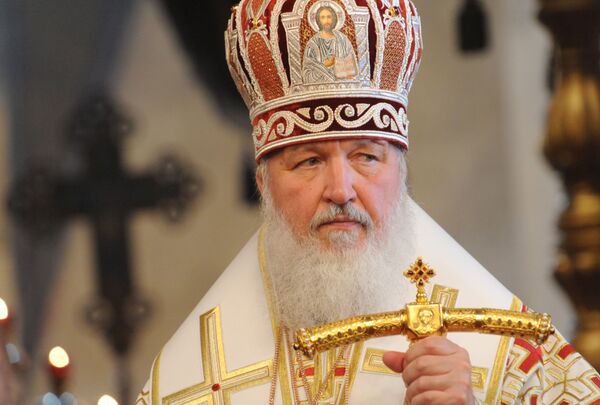 With Russia’s powerful Orthodox Church facing a wave of criticism from what it has called supporters of “radical liberal values,” a Christian publisher presented on Wednesday a book on the religious beliefs of stars of show business and film.

With Russia’s powerful Orthodox Church facing a wave of criticism from what it has called supporters of “radical liberal values,” a Christian publisher presented on Wednesday a book on the religious beliefs of stars of show business and film.

“The Church has always been persecuted,” actor and presenter Boris Korchevnikov, just one of the 35 celebrities featured in the “The Stars On Heaven” book, told a downtown Moscow news conference. “And today we are seeing more persecution – just in a different form.”

The presentation comes ahead of an April 22 “defense of the faith” nationwide prayer called by the Orthodox Church to protect it from attacks by “"anti-Russian forces.”

The Church’s Supreme Council said in a statement earlier this month that it had been targeted by “those pushing through radical liberal values” over its opposition to same-sex marriages and consumerism.

But while Orthodox Church spokesman Vladimir Legoida denied the book was designed to shore up support for Russia’s Christian establishment, he also admitted the timing of its release was fortuitous.

“There is no such thing as a coincidence for God,” he said. “But this is not our answer to bloggers.”

Orthodox Church head Patriarch Kirill was condemned by opposition figures for his public backing of Vladimir Putin in the run-up to the ex-KGB spy’s landslide victory at March 4 presidential polls. The patriarch called the 12 years of Putin's rule a "miracle of God" in a televised meeting, triggering a high-profile protest by all-female punk group Pussy Riot at Moscow’s largest cathedral.

Top Church officials have also been criticized by bloggers and by opposition media for their “lavish” lifestyles. The anti-Putin Novaya Gazeta newspaper also alleged in February a pre-patriarch-era Kirill profited from Church tobacco and alcohol sales in the early 1990s.

Patriarch Kirill was also at the center of a scandal this month regarding a $30,000 Breguget watch, which was airbrushed – although its reflection remained intact – out of an official Church photo following public indignation over his possession of the luxury timepiece. The patriarch had admitted owning the watch in an interview prior to the row, but said he never wore it. Famous blogger and anti-corruption activist Alexei Navalny - an Orthodox believer - called the incident “shameful.”

Patriarch Kirill was first spotted wearing the watch in 2009, while he was preaching austerity as a way out of an economic crisis.

But a spokesperson for Nikeya publishers stressed on Wednesday that the book contained no explicit expressions of support for the beleaguered patriarch.

A number of celebrities featured in the book express however the conviction that only religious belief can save Russia and Russians.

“Without belief, Russians transform into beasts,” says director Mikhalkov, who won an Oscar for the 1994 film "Burnt by the Sun."

“Russians are afraid of very little. That’s why they need the fear of God the most,” says television presenter Yury Vyazemsky. “Morals alone will not save them.”

“The first steps to the Church are very easy, as if God himself is leading you by the hand,” says actor Andrei Merzlikin, star of the popular gangster film "Boomer."

The release of the book coincided with a scandal involving pop star Filipp Kirkorov, who was photographed speaking at the altar of Moscow’s Prophet Elijah church during the April 8 christening of his daughter.

Pussy Riot accused police of hypocrisy for not detaining Kirkorov. Three members of the all-female punk group face up to seven years behind bars after being detained in March over their performance of an anti-Putin song at the altar of the Christ the Savior Cathedral.

“Three Pussy Riot suspects have been behind bars for over a month for exactly the same thing,” the group said in a blog statement earlier this month.