U.S. Oil Giant Agrees to Come to the Arctic 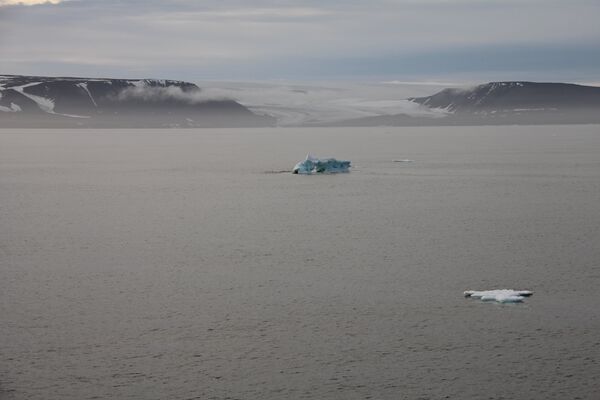 On Monday, the Russian company Rosneft and ExxonMobil agreed the details of the terms of their joint exploration of the Russian continental shelf. A cooperation agreement between them was signed nearly a year ago, but progress had stalled.

On Monday, the Russian company Rosneft and ExxonMobil agreed the details of the terms of their joint exploration of the Russian continental shelf. A cooperation agreement between them was signed nearly a year ago, but progress had stalled. Experts believe the Americans were unhappy with the tax climate in Russia. A few days ago, Prime Minister and President-elect Vladimir Putin signed a government decree granting tax breaks to companies involved in offshore development, and things immediately sprang into action.

On Monday, Rosneft and ExxonMobil signed agreements on establishing two joint ventures to explore the shelf resources in the Kara and Black Seas. Drilling of the first exploration wells is due to take place in 2015. In addition, Rosneft will get a stake in three ExxonMobil projects in Texas, the Gulf of Mexico and the Canadian province of Alberta.

Rosneft, a Russian company with a development license but no experience of shelf exploration, has long sought a Western partner for joint development of the sea shelf. According to experts, deep-water Arctic shelf projects are still beyond the scope of the Russian oil industry.

“The problem of shelf development is very difficult in every respect. No one single organization can cope with such large-scale problems and therefore any alliance with the major market players is to be welcomed,” Professor Boris Tumanyan of the Gubkin Russian State Oil and Gas University said.

“Russia’s entire production is land-based; we don’t have any deep-water Arctic projects. We only have shallow-water projects,” Capital Investment Finance House analyst Vitaly Kryukov told RIA Novosti, adding that in North America there had been a real revolution in the development and production of hard-to-access deposits of oil and gas.

Initially BP was the most likely candidate for the role of strategic partner, with the two companies signing a strategic partnership agreement in early 2011, which among other things envisioned an exchange of shares.

But in spring 2011, it was rumored that the deal was likely to fall through and that the Russian side was looking for a new partner. The reasons behind the “divorce” were recalcitrant Russian TNK-BP shareholders (the AAR Consortium formed by Alfa Group, Access Industries and Renova) putting forward conditions that Rosneft could not accept.

The company’s new partner is ExxonMobil, who have, according to the experts, an extensive track record in developing hard-to-access oil resources, which is why the Russian side is not going to limit itself to joint sea-shelf exploration alone.

“Rosneft is planning to extract hard-to-access, unconventional oil in Western Siberia, and ExxonMobil has been invited to join these projects. The important thing in Russia today is to unlock the key to developing unconventional oil; what we need in this regard is ExxonMobil’s expertise,” Vitaly Kryukov says.

But it remains to be seen to what extent the American experience is suited to the realities of the situation in Russia. Kryukov is sure that it will not work straight out of the box; painstaking efforts will be needed to adapt American technologies and skills to the specific environment of the Russian Arctic and Western Siberia.

It is no accident that Russian oilmen are so keen to explore the sea-shelf and hard-to-access reserves. When questioned by RIA Novosti, a number of experts said they believe that Western Siberia’s easily accessible resources will soon run out and that Russia may face a sharp drop in oil production unless it introduces new tax incentives. “This explains the importance of moving over to the unconventional resources that, according to forecasts, are immense – possibly in the billions of tonnes,” Kryukov says.

However, some experts doubt the expediency of developing the shelf resources at this stage.

“I think we could leave the shelf alone for the time being; it will involve huge energy costs and financial outlays. It’s not clear how the hydrocarbons they’ll produce there, with such great difficulty, will be processed for domestic needs. The transport flows and logistics are also unclear,” Prof. Tumanyan says.

He thinks it would be more expedient to work through the shelf projects at the document level for now, while focusing on practical methods to refine the hydrocarbon raw materials.

“We are lagging behind in technological know-how – that’s what we should be putting our energies into and investing in. We have to develop innovative refining methods and produce large amounts of oil and gas products to sell. I don’t think we’ll lose any money,” he says.

In his view, there are also significant profits to be made from the exploration and development of hard-to-access land resources: “There are a lot of unexplored areas here; searching for, exploring, developing new methods for extracting raw materials and processing raw materials – there’s a lot of money to be made in all this.”