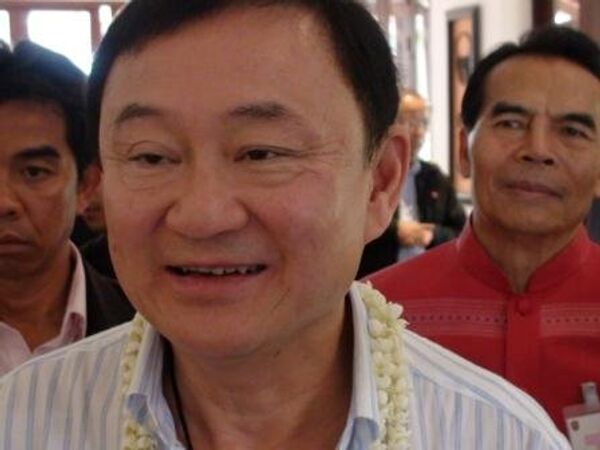 © RIA Novosti . Yevgeny Belenky
Subscribe
Former Thai Prime Minister Thaksin Shinawatra, who has been living in self-imposed exile since his government was overturned in a military coup in 2006, told RIA Novosti in Vientiane, the capital of Laos, that he would return home when the Thai people regain political unity.

Former Thai Prime Minister Thaksin Shinawatra, who has been living in self-imposed exile since his government was overturned in a military coup in 2006, told RIA Novosti in Vientiane, the capital of Laos, that he would return home when the Thai people regain political unity.

Shinawatra’s government, which won the general elections by a large margin in 2001 and 2005, was overturned in a military coup in September 2006. Later that year, the provisional Thai government initiated several lawsuits against the former premier for economic crimes. He was sentenced to two years under a case implicating his ex-wife in securing insider deals on real estate purchases for family members. Shinawatra’s supporters claim that he was framed for political reasons.  His opponents say he must return home and serve the sentence before resuming his political career.

“We’ll see how things go. I will return home only when the political unity of the Thai people is restored. I don’t want to return while people remain divided by a political conflict,” Shinawatra, who has been living abroad for five years, told RIA Novosti.

“I will not be prime minister again”

“I will return home, and I hope that this will happen soon. But I will not reclaim the post of prime minister. What is important to me is that my extensive experience be used for the benefit of the country, in whatever form. It would be quite enough for me to serve as an adviser to Prime Minister Yingluck Shinawatra. Also, I could teach at a Thai university,” Thaksin Shinawatra said in Vientiane, Laos, where he arrived on Wednesday for the Buddhist New Year celebration.

In July 2011, the Pheu Thai Party (For Thailand), which Thaksin Shinawatra created and which is currently led by his younger sister, Yingluck Shinawatra, won the general election and formed a government.

The Buddhist New Year is celebrated on April 12-15 in Thailand, Laos, Cambodia and Myanmar. The population of Thailand’s northeastern provinces mostly consists of ethnic Lao, who constitute a third of Thailand’s population – 22 million of 65 million people. An overwhelming majority of them support Thaksin Shinawatra.

On Thursday, thousands of Shinawatra’s Red Shirt supporters – members of the United Front for Democracy Against Dictatorship (UDD) – gathered at a stadium in the border city of Nong Khai. They could not go to Laos to personally greet their leader because of unprecedented security measures imposed by the Laotian authorities for the duration of Shinawatra’s visit.

“I am closer to my homeland than ever in the past few years. I could make myself up and cross the Mekong to meet you. But I don’t want to do that. I want to return home with my head held high up,” he told his supporters in a videoconference in Vientiane, a Laotian border city divided from Thailand by the Mekong River.

“I have not harmed anyone or done anything wrong. I want to return home when I will be able to freely walk its streets, not drive around in an armored car. This is a special year because we will celebrate the 80th birthday anniversary of Her Majesty Queen Regent Sirikit and the 60th birthday anniversary of His Royal Highness Crown Prince Maha Vajiralongkorn. It would be heaven to return home in this special year. Being a Buddhist, I respect the dates which promise good luck,” the former prime minister told his supporters at a Sunday demonstration in Cambodia.

Some analysts who believe that the Pheu Thai Party will dominate in parliament say that a new military coup will be staged when Shinawatra gets a chance to return home under a prisoner amnesty. Others think that everything will depend on Shinawatra’s ability to convince the royal family and the royalists among the military and the management community that he would not “provoke a revolution or encroach on the monarchy.” Shinawatra’s opponents have claimed since 2005 that he is anti-royal, even though he has never supported republican ideals and often made pro-royal statements.

Replying to a RIA Novosti question about long-term international economic cooperation programs, which had been devised by his government but were removed from the agenda after the coup, Shinawatra said that these programs would be gradually revived because they can benefit both Thailand and its foreign partners.

“I would like to continue working on many programs, but so far I can only ask the government led by the Pheu Thai Party to resume and carry on these programs without my contribution. Of the ideas drafted with a view to promoting cooperation with Russia, which are now returning to the agenda, the most important is the Energy Hub – a plan for creating a regional center in Thailand that would accumulate, store and process energy resources for the whole of Southeast Asia,” said Shinawatra, a retired police lieutenant colonel and a billionaire who had created Asia’s largest telecommunications empire before becoming a politician in the mid-1990s.

The Thai Energy Ministry announced the resumption of the Thailand Energy Hub program in October 2011.

Initially, it provided for building energy storage and transportation infrastructure and developing oil and natural gas fields in Thailand and adjacent countries jointly with foreign, including Russian, companies. Energy Minister Pichai Naripthaphan, who announced the resumption of the program, did not name the date, saying that the government of Yingluck Shinawatra would first need to reactivate the agreements with Thailand’s foreign partners and neighboring countries reached six or seven years ago.

A leader in exile

Thaksin Shinawatra, who was attending the UN General Assembly when a coup was staged in Thailand, returned to his home country only once, leaving it several weeks before his sentence was announced in 2007.

When his younger sister won the general election and came to power, the former prime minister’s opponents claimed that hers was “a puppet government” led by a puppet master – Thaksin Shinawatra.

The Thai parliament is currently discussing amendments to the Constitution, which could include a general amnesty for people persecuted for political reasons. The Pheu Thai Party and its partners in the coalition government, which have a simple majority in the lower house, support the idea of constitutional amendments and a prisoner amnesty. But the opposition Democratic Party is firmly against these changes.