Lavrov Tells ‘Third Parties’ to Stay Out of Syrian Conflict 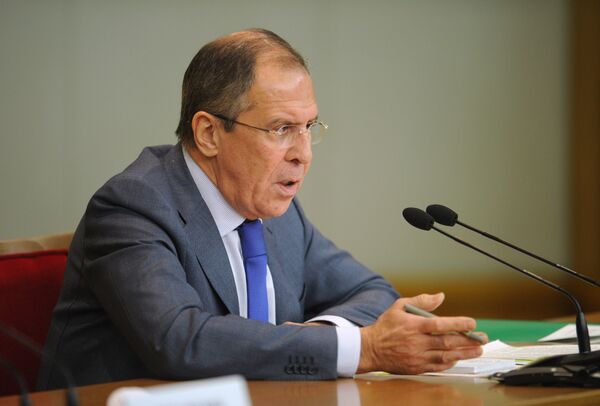 “I can’t help focusing on the problem of outer influence on the Syrian processes. There are countries, external forces which are not interested in the success of the UN Security Council’s efforts [on solving the conflict],” Lavrov said at a press conference.

The minister said that some forces tried to replace the UN Security Council with some unofficial groups like the U.S-backed "Friends of Syria" group which, as he said, antagonized the Syrian opposition against peaceful talks with the government.

On February 5, the next day after Russia and China vetoed a UN resolution on Syria pushing for President Bashar al-Assad to step down, U.S. Secretary of State Hillary Clinton proposed setting up a group that would “work with the friends of a democratic Syria around the world to support the opposition’s peaceful, political plans for change,” a group Moscow said would never be recognized.

Lavrov also called on the international community to think about Syrian people’s interests, but not about their own “opportunistic” goals.

Russian Deputy Foreign Minister Sergei Ryabkov, who also addressed a news conference on Tuesday, said that Russia would ensure a "significant number" of observers in Syria within the UN-backed monitor mission that was approved on Saturday in the UN Security Council.

“Russia will be significantly represented in the observers’ mission in Syria,” Ryabkov told journalists. He however did not elaborate on the exact number of Russian monitors due to be sent to Syria.

Russian UN Ambassador Vitaly Churkin said on Saturday while addressing the UN Security Council that one Russian officer would be among the 30-strong first batch of observers sent to Syria.

The first monitors have already arrived in the troubled country. The number of monitors will reach around 250 in total.

Ryabkov, who addressed on Tuesday Russia’s position on the international problems, also said Moscow justified suspending Six-party talks with Iran and called on Islamic Republic to adhere to the obligations on its nuclear program.

“The pause in the talks is quite reasonable; moreover, [this pause] will be filled with specific work,” Ryabkov said at a press conference. The diplomat also said the Six-party talks must be “filled with practical content.”

He also added that Iran has the right to the peaceful usage of its nuclear energy, but should fulfill its obligations on its nuclear program.

The Group of Six nations negotiating Iran’s nuclear program, which consists of Russia, Britain, Germany, China, the United States and France, met on Saturday in Turkish capital, Istanbul. Western officials hailed the progress in the talks, saying that they were “useful and constructive.” The next round of discussions that is designed to to end the deadlock over Iranian disputed nuclear program is scheduled for on May 23 in Baghdad.

Ryabkov also said that Russia had no information about military component in Iran’s nuclear program.

Iran is already the subject of a wide range of international sanctions because the West, led by the United States, accuses Tehran of pursuing a secret nuclear weapons program. However, the Islamic Republic insists its nuclear power needs are for civilian purposes only.