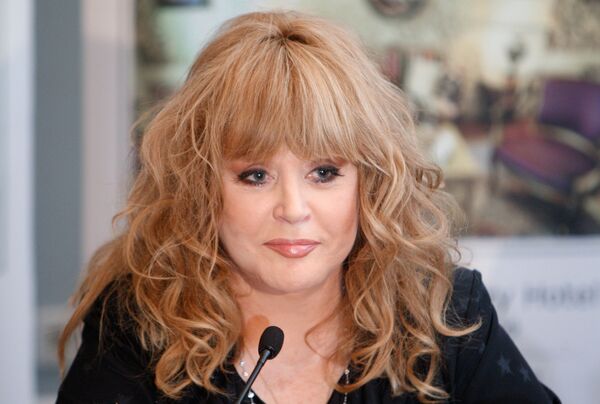 Russian pop icon Alla Pugachyova has joined a growing chorus of voices calling for the release of three members of the Pussy Riot punk group, who face years behind bars over an anti-Putin protest in Moscow’s largest cathedral.

Russian pop icon Alla Pugachyova has joined a growing chorus of voices calling for the release of three members of the Pussy Riot punk group, who face years behind bars over an anti-Putin protest in Moscow’s largest cathedral.

Pugachyova said a custodial sentence for the suspects would be like “shooting sparrows with a canon” and suggested they be ordered to carry out community work in a convent instead.

“The church exists to set such lost souls on the path to the true, holy and good Word,” she said during a televised interview on Sunday to mark her 63rd birthday.

Pugachyova shot to fame in the Soviet era and continues to enjoy massive popularity throughout the former Soviet Union.

Her comments chimed with the results of a public opinion survey released on Monday by the VTsIOM state pollster. The poll, carried out on March 31-April 1 among 1,600 respondents, indicated that a mere 10 percent of Russians wanted to see the suspects behind bars. Just over half of the respondents favored community work or a fine.

Five masked members of Pussy Riot performed a protest song entitled “Holy Sh*t” at the altar of the Christ the Savior Cathedral in downtown Moscow on February 21. The lyrics included lines such as “Holy Mother, Blessed Virgin, chase Putin out!”

Pussy Riot said the performance was a response to Orthodox Church head Patriarch Kirill’s “support” for President-elect Vladimir Putin in the run-up to his landslide March 4 election victory and accused him of “believing in Putin,” rather than God. Putin’s press secretary has said the president-elect reacted “negatively” when told of the group’s protest.

Suspects Maria Alyokhina, Nadezhda Tolokonnikova and Yekaterina Samutsevich were detained in early and mid-March and face up to seven years in jail on hooliganism charges. They have been remanded in custody until their trial later this month. All the suspects admit being part of the Pussy Riot collective, but deny taking part in the cathedral performance. Both Alyokhina and Tolokonnikova have small children.

A number of religious figures have also urged leniency for the suspects, including Archpriest Vsevolod Chaplin, who oversees relations between the society and the Orthodox Church.

But Patriarch Kirill hit out at those who he said seek to "justify and downplay this sacrilege" in an address to believers in March. "My heart breaks from bitterness that amongst these people there are those who call themselves Orthodox."

Amnesty International has recognized the detained members of Pussy Riot as prisoner of conscience, a decision that was slammed by Orthodox Church spokesman Vladimir Vigilyansky as an “insult to those genuine prisoners of conscience who have suffered under totalitarian regimes such as China, Iran, the Soviet Union and Hitler’s Germany.”