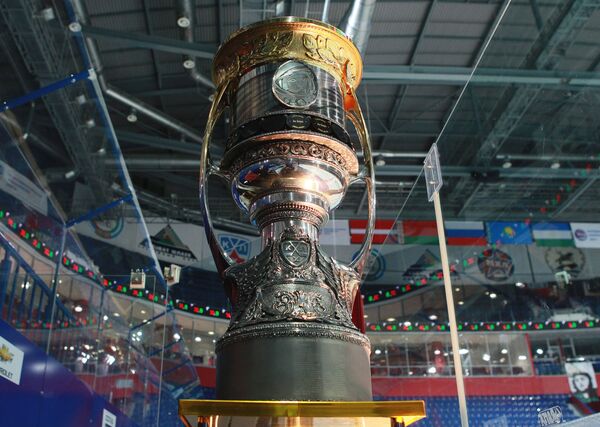 The Gagarin Cup final between Avangard Omsk and Dynamo Moscow is too close to call for the pundits, who predict the series will need all seven games to determine a winner.

The Gagarin Cup final between Avangard Omsk and Dynamo Moscow is too close to call for the pundits, who predict the series will need all seven games to determine a winner.

The puck drops Friday in the first game of the KHL series in Omsk, marking the start of what hockey watchers expect will be an intense yet drawn-out battle.

"A lot will depend on Omsk club's ability to cope with the well-organized and disciplined opposing defense. But nevertheless I expect Avangard to have a slight advantage."

However, 1972 and 1976 Olympic champion Vladimir Petrov claims Dynamo has the edge because of heavy wins against Western Conference finalist SKA St. Petersburg earlier this month.

"The Moscow side is my favorite," Petrov told RIA Novosti. "Their previous performances made it clear they play as well on the road as at home."

No-one forecasts a landslide win for either team.

"I think it is very probable that it will take all the seven matches to determine the cup winner," said former Russian coach Boris Mikhailov, one of Petrov's teammates in the acclaimed Soviet team.

The final series starts with two sold-out games in Omsk on Friday and Sunday.

All tickets flew out of the box office days in advance, ensuring a 10,000-strong attendance at the Omsk Arena. The arena's owner Roman Abramovich recently donated it to the team.

Neither finalist has ever won Gagarin Cup before in the KHL's five-year history.

Dynamo secured its place in the final with a 4-0 rout of SKA in the semifinal that was rounded off in style with a 6-1 thrashing of the league's richest team.

Avangard won with almost as little resistance, overcoming regular-season champions Traktor Chelyabinsk 4-1, although most games in the series were decided by a single goal.

Last season Avangard crushed out at the conference semifinal stage with a 4-2 series loss to Metallurg Magnitogorsk.

Dinamo Riga eliminated Dynamo Moscow a round earlier and by the same series score.