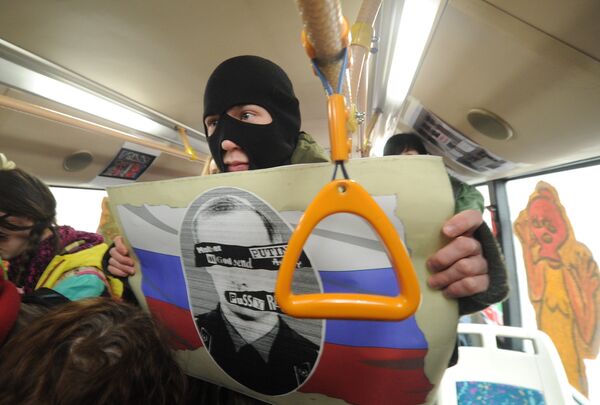 Russia's rights ombudsman condemned on Wednesday the decision to remand in custody three members of the all-female punk group Pussy Riot over an anti-Putin protest at Moscow's largest cathedral.

Russia's rights ombudsman condemned on Wednesday the decision to remand in custody three members of the all-female punk group Pussy Riot over an anti-Putin protest at Moscow's largest cathedral.

"I hope the court takes a reasonable decision. We have spoken out against them being detained before their trial," Vladimir Lukin told reporters in the Siberian city of Tomsk. "Why are they in custody? Did they try to blow up the cathedral?"

Five members of Pussy Riot, clad in brightly-colored balaclavas, bowed and crossed themselves as they sang an acapella version of a song entitled "Holy Sh*t" at the cathedral in February. The lyrics included lines such as "Holy Mother, Blessed Virgin, chase Putin out!" The protest came amid the biggest demonstrations against President-elect Vladimir Putin’s rule since he first came to power in 2000.

The three suspects all admit being part of the Pussy Riot collective, but deny taking part in the cathedral protest. They face up to seven years behind bars if found guilty of hooliganism charges.

Amnesty International recognized the suspects of prisoners of conscience last week and called on the Russian authorities to release them ahead of their trial, set for later this month.

Lukin said the three women should not be imprisoned for the performance, but be ordered to pay fines instead.

The group said the performance was a protest against Patriarch Kirill's support for President-elect Vladimir Putin in the run-up to his landslide March 4 election victory.

Justice Minister Alexander Konovalov and a number of Orthodox Church figures have also urged leniency for the women.

But Patriarch Kirill hit out at those who he said seek to "justify and downplay this sacrilege" in an address to believers in March. "My heart breaks from bitterness that amongst these people there are those who call themselves Orthodox," he said.

Pussy Riot first hit the headlines in January, when they raced through a musical diatribe against Putin on a snowy Red Square, calling for "Revolt in Russia!" and chanting "Putin's got scared" before being detained by police.