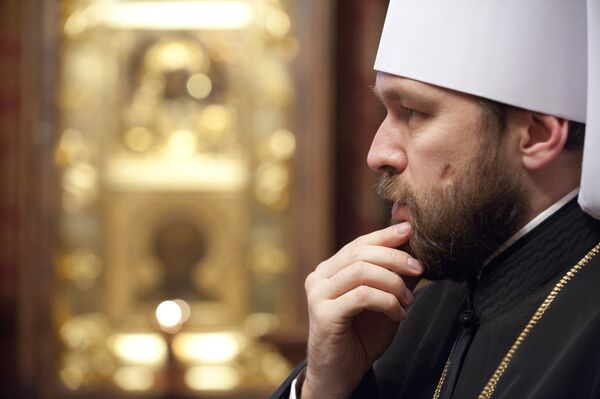 © RIA Novosti . Sergei Pyatakov
/
Go to the photo bank
Subscribe
A prominent hierarch in the besieged Russian Orthodox Church has warned that political correctness can lead to “the physical destruction of European nations.”

A prominent hierarch in the besieged Russian Orthodox Church has warned that political correctness can lead to “the physical destruction of European nations.”

“The godless liberal ideology dominant in many Western countries does not just harm religions, it targets such foundations of human existence as family values,” said Metropolitan Hilarion Alfeyev, who heads the foreign ecclesiastical relations department at the Moscow patriarchate.

The problem is “propaganda of homosexuality” and single-sex marriage, which are the causes of the demographic crisis that has gripped Europe, Ilarion said in an interview.

Legislators in St. Petersburg, Russia’s second-biggest city, banned “gay propaganda” in February despite protests from domestic and foreign LGBT activists. A nationwide ban was proposed in March, with the bill pending review in the State Duma.

“The mania of political correctness is spreading in many Western countries, including Great Britain, like manic psychosis,” Hilarion said.

He cited as examples the recent crackdown on Christian symbols in England, where the government is seeking to allow employers to prohibit their staff from wearing crosses around their necks, even under their clothes.

“If Great Britain follows the Soviet Union’s ideological dictate of militant secularism, it will not be the most flattering comparison for a country that calls itself democratic,” the priest said.

Bans on religious symbolic are aimed at instilling peace between various confessions, but it is the atheists, not the believers, who are irritated by such symbols, Hilarion said.

He also conceded that anti-church sentiment is rising in Russia, but put it down to “church opponents who are mounting such campaigns in our society same as in the Western one.”

Hilarion was referring, in particular, to the recent scandals involving a “punk prayer” in a Moscow cathedral and criticism of Patriarch Kirill, head of the Russian Orthodox Church, over his prestigious residence in the country’s capital.

Five masked members of the female punk rock group Pussy Riot performed a short song lambasting the government and its ties with church near the altar of the Christ the Savior Cathedral in Moscow in February.

Three of them were detained and face up to seven years in prison over hooliganism charges, prompting Amnesty International to recognize them prisoners of conscience.

Church leaders, including Kirill, have repeatedly criticized the “sacrilegious” stunt and refused to pardon the Pussy Riot members or plead for a soft punishment for them.

Meanwhile, Kirill himself came under fire in the media over his posh apartment in downtown Moscow and a lawsuit demanding 20 million rubles ($670,000) from another priest, his neighbor, who allegedly ruined Kirill’s collection of old books during repairs in his own apartment.