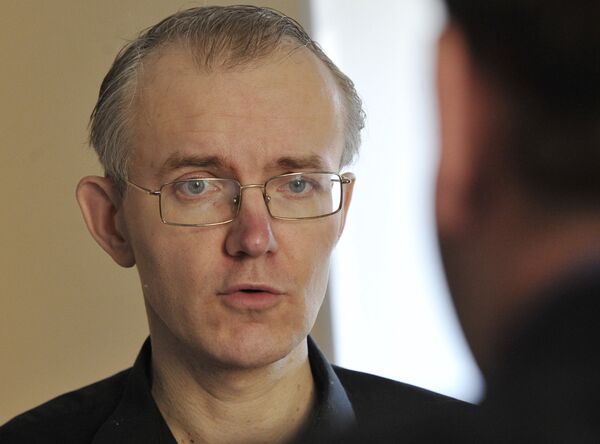 © RIA Novosti . Alexei Kudenko
/
Go to the photo bank
Subscribe
The Kremlin is keeping silent on a hunger strike over alleged electoral violations in Astrakhan, which is now in its fourth week, but this could allow the opposition to regroup and mount a new campaign in the provinces, political pundits said.

The Kremlin is keeping silent on a hunger strike over alleged electoral violations in Astrakhan, which is now in its fourth week, but this could allow the opposition to regroup and mount a new campaign in the provinces, political pundits said.

“The opposition lost the streets after the presidential elections, but now they get a chance to open cans of worms in the regions,” said Alexei Mukhin, head of the Center for Political Technologies think-tank.

Prosecutors in Astrakhan, a city of 500,000 in southern Russia, said on Tuesday that their check only confirmed five reports of violations at the mayoral elections on March 4.

Opposition candidate Oleg Shein of A Just Russia party said earlier that voting was rigged at 116 of 203 polling stations in the city, with most violations documented by surveillance cameras.

Shein won under 30 percent of the vote, compared to 60 percent for ruling United Russia party’s candidate Mikhail Stolyarov, but insists his vote total was reduced by half through blatant fraud, with ballots cast for him simply counted for Stolyarov.

Stolyarov said on Tuesday his victory was fair and refused to voluntarily agree to a repeat vote.

Shein and a number of his supporters went on hunger strike on March 16, demanding a repeat vote. He dismissed on Sunday blog reports that they were close to dying, but conceded that his health was deteriorating.

“The team of Stolyarov and [his predecessor Sergei] Bozhenov are used to winning elections through such methods,” Alexei Titkov, a regional analyst with the Higher School of Economics in Moscow, said on Tuesday. “I’m sure Shein has reasons to protest.”

The incident hit national spotlight this week when the campaign for the repeat vote received support from leaders of anti-government protests that gathered tens of thousands in Moscow during the parliamentary and presidential votes in December and March, respectively.

The protests dissipated in Moscow after the federal elections, but the protest drive remains strong and can spill into the countryside, Mukhin said.

The opposition doesn't have the resources to participate in all regional elections, but it is focusing on the few targets such as Astrakhan or Yaroslavl, where an opposition candidate trounced a ruling party nominee in April 1 elections that were heavily monitored by independent observers, he said.

“It’s their second chance,” he said. “The Kremlin boys are too relaxed after the federal elections, but they’ve only won one battle, not the war.”

Putin’s spokesman Dmitry Peskov said on Tuesday that his patron was keeping tabs on the situation in Astrakhan, but that matters were in the hands of local courts and prosecutors.

But analysts contacted by RIA Novosti agreed that Putin and his outgoing predecessor Dmitry Medvedev have enough leverage on the situation.

To defuse the scandal, the Kremlin needs to enable an honest and unbiased investigation of the situation, even if it would result in a repeat vote, said Yevgeny Minchenko of the Moscow-based International Institute for Political Expertise.

“It may be a tactical defeat, but it also will be a strategic victory for the authorities” who would demonstrate their ability to play fair, Minchenko said.

But Titkov said that a repeat vote in the mayoral elections can cast doubt on the presidential elections held on the same day, which is why Putin’s advisers may be against this course of action.

Putin collected 68 percent in Astrakhan region on March 4, compared to the national average of 63 percent.

The situation in Astrakhan is gradually nearing the boiling point, with even death of a participant of the hunger strike, the worst-case scenario for the Kremlin, currently not ruled out, analysts said.

“It could be the ‘sacrificial lamb’ that would boost the protests,” said Minchenko.

When tensions mounted ahead of the presidential vote on March 4, Putin spoke about the opposition preparing a “sacrificial lamb” whose death would trigger mass street riots. The post-election protests, however, ended without incidents.

The Central Elections Commission promised to comment on the situation on Wednesday. It has still failed to provide Shein with complete footage from all polling stations in Astrakhan as of Tuesday.