Zvonareva and Petrova Eliminated in Charleston 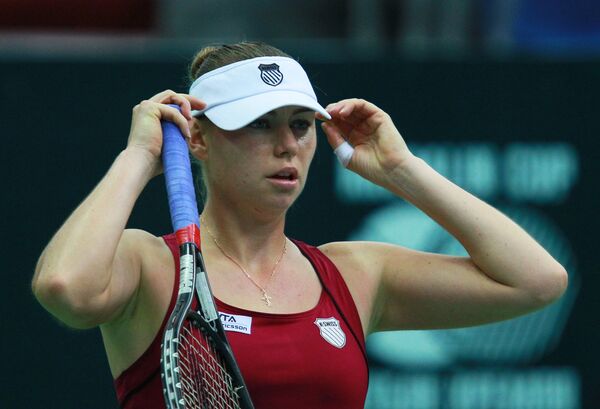 Russia’s last two representatives in the Family Circle Cup in Charleston, Vera Zvonareva and Nadia Petrova, have been eliminated in the quarterfinals.

Russia’s last two representatives in the Family Circle Cup in Charleston, Vera Zvonareva and Nadia Petrova, have been eliminated in the quarterfinals.

Zvonareva lost to ninth seed Lucie Safarova 6-3, 6-3, while Petrova was thrashed 6-1, 6-2 by Slovenia’s Polona Hercog in a surprise result.

Hercog was appearing in her first quarterfinal at a WTA premier tournament.

"I was aggressive from the beginning," Hercog said in comments on the WTA website.

"Nadia's a very experienced player. We were 1-1 before this match, and it's always a challenge to play a player of this kind of class, and I'm just very happy with this win."

Hercog will face Safarova in Saturday’s first semifinal, while Serena Williams and Samantha Stosur face off in the other game.

Both Russians have strong records in Charleston. Petrova won the tournament in 2006, defeating Patty Schnyder in the final, while Zvonareva was the losing finalist in 2008 and 2010.

In the doubles, Russia’s Anastasia Pavlyuchenkova and her Czech partner Safarova have reached the semifinals after beating the reigning champions, Russian player Elena Vesnina and India’s Sania Mirza, 6-7(2), 7-5, 10-7 in a marathon match.

They will now face South Africa’s Liezel Huber and U.S. player Lisa Raymond for a place in the final.