Zenit on Track for Title With 1-0 Win at Loko 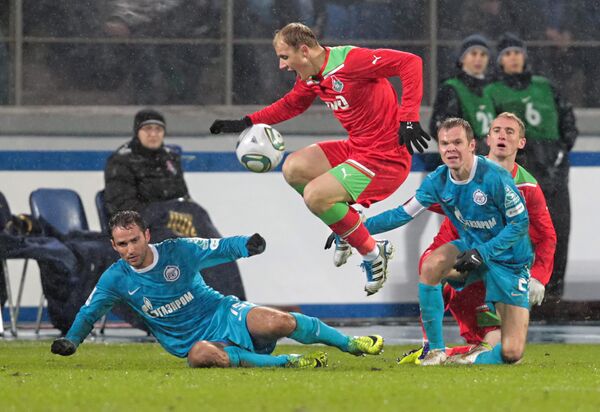 Zenit goalkeeper Vyacheslav Malafeev deserved equal credit for the win after saving a first-half Roman Pavlyuchenko penalty, sending the reigning champions 12 points clear at the top of the table.

CSKA Moscow can restore the gap to nine points when they host Anzhi later Saturday, but games are running out with just six remaining after this round.

Shirokov gave the hosts the win with his first goal since September, tapping in on 75 minutes after Konstantin Zyryanov's corner had evaded most of the Lokomotiv defense.

Lokomotiv Moscow drop from third to fourth on 63 points, but remain in the chase for second place, currently occupied by CSKA on 65.

Lokomotiv coach Jose Couceiro refused to put the result down to Pavlyuchenko's miss.

"We had a great first half, and created decent chances apart from the penalty," Couceiro said. "We played great, we controlled the game, but it's hard to play against Zenit, they're the best team in the country at the moment."

Zenit coach Luciano Spalletti was serving a one-match ban after being sent off in the last game against Spartak Moscow.

The hosts had the better of the first half, with Zenit thanking Malafeev for keeping them in the game.

The ball fell to Victor Obinna early on but he drove low straight at Malafeev.

Guilherme in the Lokomotiv goal rushed out to deny Roman Shirkov a shot moments after, and the Brazilian was in place for a Szabolcs Huszti free kick on 20 minutes.

The hosts earned a penalty when Tomas Hubocan intercepted a through pass with his outstretched arm, but Malafeev was equal to Pavlyuchenko's well-struck effort.

The Russia international forward, looking to atone for his penalty miss, burst through on 38 minutes but blazed over the crossbar from 20 yards.

At the other end Shirokov sliced high from 18 yards as the ball sat up nicely inside the box.

Malafeev again kept out Lokomotiv just before the break with a full-stretch save of Roman Shishkin's free kick.

Andrei Arshavin came on for Zenit in the second half and immediately made his presence felt, setting up Shirokov only for the midifielder to strike over once again.

Guilherme then dashed out to deny Vladimir Bystrov and punch the deflection away.

Then, a period of play ensued that saw both teams get into promising positions before divots in the pitch broke up the attacks.

Felipe Caicedo stormed through the heart of the Zenit defense before the ball sprang up and bounced away from the Lokomotiv attacker.

Arshavin initiated a Zenit counterattack that ended when Domenico Criscito spooned a cross out for a goal kick after the ball took a curious bounce.

Zenit turned up the pressure, and took the lead when the Lokomotiv defense failed to clear an Arshavin corner, which fell to an unmarked Shirokov for an easy finish.

It was the Russia international's first league goal since scoring against FC Tomsk in September.

Lokomotiv's tried get back into the match but were largely frustrated as surmised by Denis Glushakov, who skewed horribly wide late on.

Caicedo thumped a free kick over as the seconds ticked away.

Earlier Saturday, ten-man Amkar beat Rostov 1-0 thanks to an own goal, and Dynamo Moscow played out a 1-1 draw with Rubin Kazan.