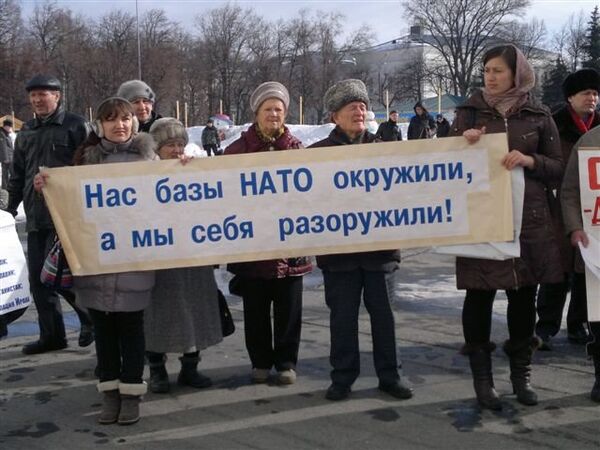 About 800 people participated in a march organized by members of unregistered political party Volya on Saturday against plans to establish a NATO transit base in Ulyanovsk airport, RIA Novosti reported.

About 800 people participated in a march organized by members of unregistered political party Volya on Saturday against plans to establish a NATO transit base in Ulyanovsk airport, RIA Novosti reported.

The U.S. hopes to set up a NATO transit base in Ulyanovsk. Media reported that Russia could sign an agreement with NATO on the multimodal transit of cargo from Afghanistan which will combine air and ground delivery of goods. Under this scheme goods would be delivered by air from Afghanistan to Russia bypassing Uzbekistan. Russia will form trains for delivery of goods to NATO countries. Russian Defense Ministry said that goods transported through the territory of Russian will be checked by customs and that NATO transit hub is not NATO or U.S. military base.

Volya party wrote a petition to Ulyanovsk Region Governor Sergei Morozov. It reads that “the city could become the largest in Europe drug trafficking center.” The residents are worried about “the smuggling of weapons and ammunition”, “NATO occupation” and “prostitution.”

Two more anti-NATO protests organized by the local communists were held in Ulaynovsk. About one hundred people attended the morning protest. The second protest is scheduled for the evening. It is expected that not more than 100 people will participate in it.

Saturday’s protest of Ulyanovsk residents was the largest since the beginning of February when official information about NATO plans appeared in media.

Ulyanovsk Region Governor Sergei Morozov called on Ulyanovsk residents to prevent provocations. He said that “there will be no military base in Ulaynovsk or any NATO military centers” and that “there are no talks about military facilities.” According to Morozov, there will be no NATO military or civilian personnel and non-military goods will be transported by planes of Russian companies “Volga-Dnepr” and “Polyot” the flights will be operated by Russian crews.