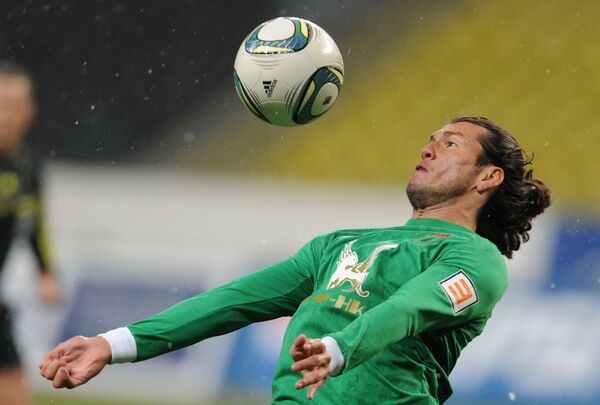 A header from Paraguay striker Nelson Haedo Valdes secured a 1-1 draw for Rubin Kazan away to Dynamo Moscow on Saturday.

A header from Paraguay striker Nelson Haedo Valdes secured a 1-1 draw for Rubin Kazan away to Dynamo Moscow on Saturday.

Dynamo overtake Lokomotiv Moscow and move into third, although the Railwaymen can recover the position if they avoid defeat against Zenit St. Petersburg later.

The draw ensures Rubin stay sixth, although they are now level on points with Spartak Moscow, who play Sunday.

Dynamo now have four points from their last five home games, on a worn Arena Khimki pitch that his been the target of increasing criticism.

Zvjezdan Misimovic opened the scoring for Dynamo on 10 minutes with his second goal in two games, as he took advantage of a missed interception to break free of the defense and flick the ball over onrushing Rubin goalkeeper Sergey Ryzhikov.

Valdes leveled the score on 67 minutes, connecting with Bibras Natkho’s indirect free-kick to send a header past Anton Shunin in the Dynamo goal.

Rubin had the first chance of the game in the second minute when Alan Kasaev forced Shunin to stretch to save his low long-range effort.

After Misimovic’s goal, Dynamo could have had a second when the Bosnian sent German teammate Kevin Kuranyi one-on-one with Ryzhikov, who easily saved Kuranyi’s weak effort.

Misimovic attempted a bicycle kick in the Rubin area on 33 minutes, but sent the ball over the bar, before Kasaev missed the target with a volley at the other end.

Dynamo defender Leandro Fernandes was booked for a reckless challenge on Kasaev on 80 minutes. Natkho took the resulting free-kick, but Alexander Ryazantsev failed to control the ball in a good scoring position.