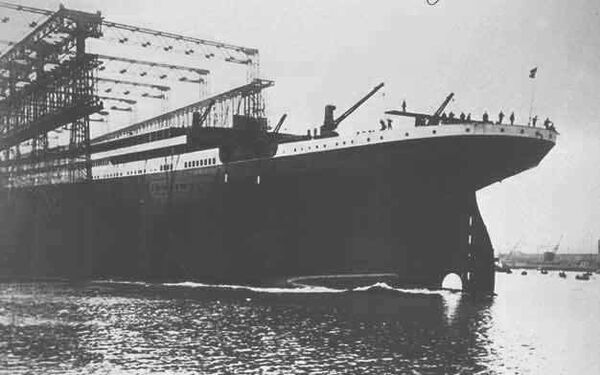 © Photo : Public Domain
Subscribe
The RMS Titanic, the world’s largest super-liner in early 1912, was owned by the British shipping company White Star Line. On April 14, 1912, the Titanic struck an iceberg during its maiden voyage from Southampton in the United Kingdom to New York in the United States and sank in the early hours of April 15.

The RMS Titanic, the world’s largest super-liner in early 1912, was owned by the British shipping company White Star Line. On April 14, 1912, the Titanic struck an iceberg during its maiden voyage from Southampton in the United Kingdom to New York in the United States and sank in the early hours of April 15. There were over 2,200 passengers and crew aboard the ship. An estimated 1,400-1,517 people perished in the disaster. About 700 passengers were rescued.

Plans to salvage the Titanic were discussed as early as in 1912. Those advocating the salvage project wanted to recover and bury the victims’ bodies. Despite substantial funding, such an operation was not feasible at that time.

Various options were proposed for salvaging the Titanic after the shipwreck site was located. For instance, there was a proposal to use a submarine equipped with electric magnets. Another salvage project called for using pontoon-mounted magnets for raising the ship to the surface. However, the idea of raising the Titanic was abandoned with the onset of World War I.

The search for the Titanic was resumed in 1953. Specialists working for a British salvage company detonated explosive devices near the alleged shipwreck site and tried to use their echoes to map the ocean floor. The search produced no results.

In 1966, an Englishman named Douglas Wally launched a $5 million project to locate the wreck site. He suggested locating the liner and placing plastic water-filled containers around its hull. An electric current transmitted through the containers would have turned water into gas, thus raising the ship to the surface. Wally also studied another salvage option using air-filled nylon balloons. He wanted to turn the Titanic into a floating museum. However, the required funds for implementing the project were not raised.

Numerous salvage options were suggested from 1970 till 1980. One such project called for freezing the liner’s insides, so that it would rise to the surface like an ice cube. The same objective could have been accomplished by encasing the ship’s hull in a nitrogen-filled net. Other options called for filling the ship with table tennis balls or 180,000 metric tons of liquid wax. Some other salvage projects were contemplated.

An international expedition came up with what was probably the most feasible salvage project. A deep water electrolytic process would have broken down seawater into several components, including hydrogen and oxygen. Both gases were to have filled plastic reservoirs that would have raised the ship to the surface. This project would have cost an estimated two million pounds. Such expenses would probably have been recouped because the Titanic’s safes reportedly contained gold worth eight million pounds.

On July 14, 1980, the research vessel H.J.W. Fay owned by Texas oil tycoon "Cadillac" Jack Grimm set out to locate the Titanic. Grimm invited two famous oceanographers to join the expedition. His ship conducted three expeditions in 1980, 1981 and 1983, respectively. Despite substantial funding, the Titanic was not located.

Dr. Robert Duane Ballard, Head of the Deep Submergence Laboratory at the Woods Hole Oceanographic Institution in Massachusetts, made the next attempt to locate the Titanic. Dr. Ballard who had studied the circumstances of the Titanic disaster for 13 years read all available historical documents relating to the Titanic.

The U.S. Navy financed the development of the deep sea underwater robot craft, the Argo, which was, in fact, a metal platform equipped with five video cameras and two sonars.

On September 1, 1985, a screen linked with the Argo’s video camera showed several man-made objects. The wreckage of the Titanic was located the very next day.

Thousands of images were taken in the next four days. The Titanic’s fragments were scattered over an area with a radius of 1,600 meters at a depth of about 3,800 m. The ship’s bow was deeply embedded in the ocean floor under its own weight. The stern was located 800 m away, and not far from it were fragments of the ship’s middle part. Various items, including copper kitchen utensils, coffee cups, toilet articles, candelabra, galley stoves, ceramic doll heads and many others, were scattered between ship fragments all over the ocean floor.

In July 1986, Dr. Ballard and his team conducted their second expedition to the Titanic wreck site aboard the vessel Atlantis II. The expedition operated Alvin, a deep diving submersible, which could descend to 4,000 m.

Dr. Ballard and two other specialists boarded the Alvin, reached the bottom and approached the liner’s bow section, which had sunk 20 m into silt and sand. The left anchor was located two meters above the ocean floor, and the right anchor was lying on the bottom. The ship’s sides were covered with huge stalactite-shaped “rusticles.” The deck’s wooden planks were nowhere to be seen. Instead, the deck was covered by a layer of tiny shells and mollusks, which had destroyed virtually all the wood. The ship’s interiors and furniture, with the exception of some teak and oak parts, did not survive either.

On July 24, 1986, Dr. Ballard placed a metal plaque on the ship’s bow on behalf of the New York Explorers Club asking that “any who may come hereafter leave undisturbed this ship and her contents as a memorial to deepwater exploration.”

Experts subsequently established that the Titanic was so badly damaged that any salvage attempt would tear it apart.

In 1987, a U.S. federal court declared RMS Titanic, Inc. the official salvor-in-possession of the Titanic.

Official invoices note that the Titanic was carrying a jewelry collection worth about $300 million. The ship was also carrying the original text of poet Omar Hayam’s “Rubáiyát,” as well as the mummy of an ancient Egyptian priestess. In addition, many of the ship’s passengers had brought their own jewelry.

In 1994, RMS Titanic, Inc. received exclusive rights to explore the wreck and to raise the liner’s fragments and other items from the ocean floor.

In 1987-2002, the company organized six expeditions worth $11 million to the wreck of the Titanic. In all, more than 6,000 items were recovered during the expeditions. Their total value was estimated at $110 million. The recovered items are either displayed at various stationary or touring exhibitions or have been auctioned off.

In 2002, RMS Titanic, Inc. waived its rights and renounced any subsequent expeditions to the wreck of the Titanic, citing financial problems. This happened after a court order forbade the company from selling any items recovered from the sunken ship.

In 1998, Dr. Ballard said the expedition to the wreck of the Titanic had been sponsored by the U.S. Navy, which wanted to locate two U.S. submarines that had sunk in the vicinity. The scientists spent most of the time studying the submarines. The expedition’s members devoted only 12 days to exploring the Titanic wreck. The U.S. Navy declassified this information in 1998.

In 2004, Dr. Ballard organized a new expedition to the wreck of the Titanic and found out that the ship had sustained serious damage over the past 19 years. The scientist blamed the organizers of tourist excursions to the wreck that scavenge the ship for souvenirs.

The ship’s deck has crumbled in many places. Noticeable ship parts, including the ship’s bell and the mast beacon, have disappeared.

In 2004, the United States signed an international agreement on protecting the site of the Titanic’s wreck and the liner’s fragments resting on the ocean floor. The United Kingdom, France and Canada also took part in drafting the agreement. Under the document, the wreck of the Titanic and the ship’s fragments were declared an international maritime memorial and an underwater grave containing the remains of men, women and children who had perished in the maritime disaster.

The countries, parties to the agreement, control underwater descents to the Titanic and to the section of ocean floor where the ship lies, in accordance with their respective jurisdictions. The agreement was signed in order to prevent the financing and technical support for unauthorized expeditions to the Titanic, as well as other actions which might harm the relic.

In 2004, over 400 exhibits, including a piece of wood from the ship’s Grand Staircase, a life preserver, a restaurant menu and a passenger’s pocket watch that stopped at the moment when the ship sank, were auctioned off.

The collection went to an ordinary American from Santa Rosa, California, who had started collecting the rare artifacts after seeing the movie “Titanic.”

As time goes by, the Titanic continues to disintegrate. By comparing the latest images of the liner’s fragments with those taken during the wreck’s discovery in 1985, many scientists predict that the fragments lying on the ocean floor will fall apart some 20-30 years from now. Some experts believe that the ship will become virtually unrecognizable in another 100 years.