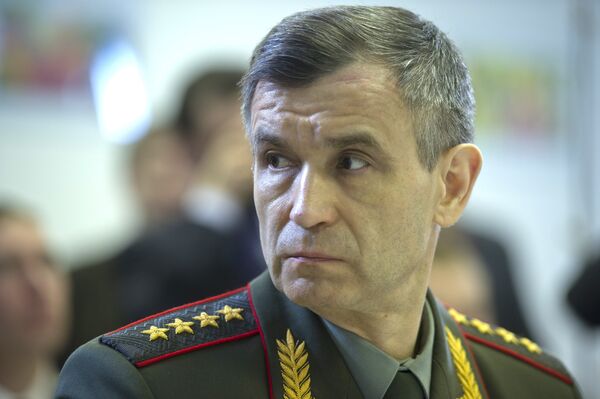 Three of the four factions in the State Duma have postponed a decision on the possible dismissal of Russia's beleaguered top cop, Interior Minister Rashid Nurgaliyev, pending publication of his report on April 13.

Three of the four factions in the State Duma have postponed a decision on the possible dismissal of Russia's beleaguered top cop, Interior Minister Rashid Nurgaliyev, pending publication of his report on April 13.

The Just Russia party’s faction is the only one that is going to seek Rashid Nurgaliyev’s resignation following the deaths of a number of individuals in police custody, particularly a detainee who died in Kazan after police allegedly sodomized him with a champagne bottle.

In the aftermath of that incident, five police officers in the Kazan police squad were arrested and Tatarstan’s Interior Minister Asgaty Safarov was reprimanded.

Some lawmakers pressed for Nurgaliyev’s resignation, saying he should bear responsibility for the failed police reform that was designed to make police more trustworthy.

“Our faction’s position is to be consistent: to avoid sensational statements but to work on problematic issues,” Yarovaya said.

“A lot will depend on the minister’s report,” Melnikov said.

The Liberal Democratic Party (LDPR) also plans to make its decision later, at the faction’s meeting on April 9. Yaroslav Nilov, coordinator of the faction, said the party might push for Nurgaliyev’s resignation.

“A situation when people have no trust in police protection and are afraid of the police is unacceptable in a law-based modern state,” Nilov said.

Deputy Speaker Nikolai Levichev of the Just Russia said the party would advocate the minister’s dismissal.

“We have long proposed that Nurgaliyev quit. We don’t need to support anybody's opinion here, we have had our own for a long time,” Levichev said, adding that a new minister should have an impeccable reputation.

On April 3, reports arrived that two policemen from Kostroma had violently beaten and tortured two detainees during an interrogation in 2010.

A new law on police reform came into effect on March 1, 2011, giving the Interior Ministry until the end of the year to complete all of the necessary reforms and a whole new look. The reform included retesting of the police force, introducing politeness and changing the name from the Soviet-era “militia” to the “police” more commonly accepted throughout the world.