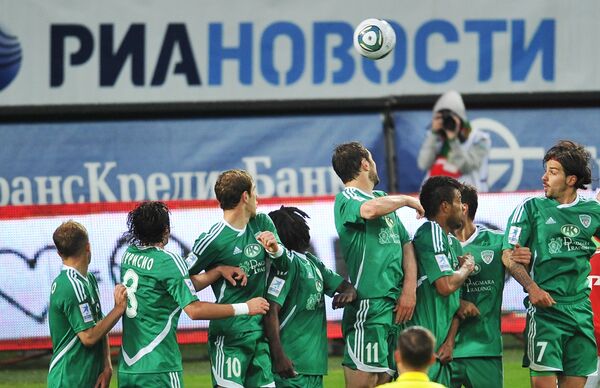 The win lifts the Chechen team two places to tenth in the table, although both the teams Terek overtook will play later this weekend.

Spartak Nalchik could be left five points adrift at the foot of the table if 15th-placed FC Tomsk win at FC Krasnodar on Sunday.

Terek took the lead on 25 minutes when Mauricio latched onto Igor Lebedenko’s square pass before launching a fierce shot from the edge of the area into the top corner of Alexander Budakov’s goal.

Pyotr Polchak sealed the win on 83 minutes with a tap-in after slipping free of his marker to latch onto a ball from Jiri Jiranek.

Mauricio headed in Blagoy Georgiev’s cross on 66 minutes, but the goal was disallowed in controversial circumstances after several minutes of uncertainty.

Terek dominated the game, recording 16 shots to Nalchik’s four, while the visitors failed to hit a shot on target all game.

Spartak Nalchik’s Bosnian international midfielder Adnan Zahirovic will be suspended for at least one game after he was sent off for a dangerous tackle on 71 minutes.

Spartak Moscow will face Dan Petrescu’s FC Kuban in Sunday’s only game in the championship group.

In the relegation group, Amkar Perm play FC Rostov on Saturday, before Sunday sees FC Krasnodar welcome FC Tomsk, who can close the gap to Krylya Sovetov to five points with a win.