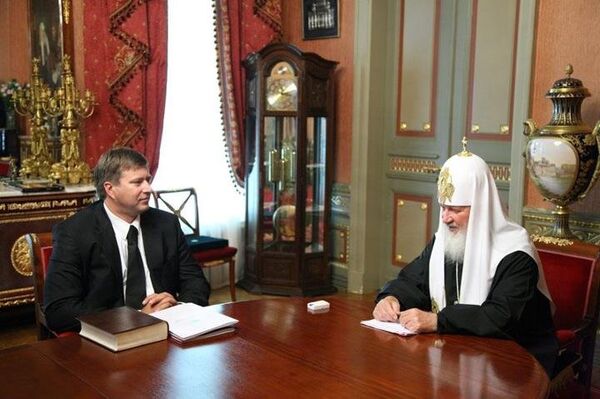 The press service of Patriarch of Moscow and All Russia Kirill apologized on Thursday for an image editing “mistake” by photo editors, who airbrushed out the wristwatch the Patriarch was wearing.

The press service of Patriarch of Moscow and All Russia Kirill apologized on Thursday for an image editing “mistake” by photo editors, who airbrushed out the wristwatch the Patriarch was wearing.

The image in question shows the patriarch’s wrist apparently covered with a black sleeve, but the reflection of a watch is clearly visible in a polished surface.

A statement issued by the patriarch’s press service said that photo editors made “a silly mistake.”

“At the moment the photo in question has been posted in its original quality. We apologize to all visitors for this technical error,” the statement says.

The statement said that one of press service’s main policies is abstaining from the use of photo editing software to alter images.

“Photo editing is always only about color and other technical parameters. The reason for this blatant violation of our internal ethics will be thoroughly investigated and those guilty will be severely punished,” the press service said.

The deputy head of the patriarch’s press service, Alexander Volkov, said that the photo was airbrushed by a 24-year-old female employee “on her own personal inexperienced initiative.”

“Unfortunately, this person showed pointless personal initiative without getting an approval from her supervisors. Clearly, this is a folly, a misunderstanding; of course, we don’t want to conceal anything. There is nothing to be ashamed of, we don’t study every photograph in search of anything that might seem weird to our compatriots,” Volkov told the Russian News Service radio station.

Bloggers found the image with traces of editing, dated July 3, 2009, on the patriarch’s website. The information quickly became a popular topic among Russian bloggers in the wake of a statement from the patriarch last week to journalist Vladimir Solovyev, who quoted the Patriarch as saying that he wore “an inexpensive Russian-made watch with the Russian state emblem.”

Solovyev said that the patriarch described as “collage” any image that shows him wearing a luxury Breguet watch worth some $30,000. The Patriarch said that though he had received a Breguet watch as a present, he kept it in its box.